GCCC There's a lot of Cs for ya. 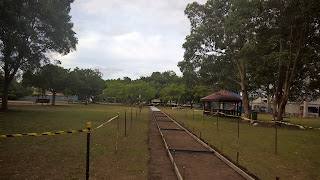 It's no secret that I live next door to a park. When we were deciding about whether or not to buy the place, the park was a big factor. Would the visitors give me the shits with their little squeals of joy as they play on the swings? Would a dog be possible given that it's a DOG PARK? Would the Council keep it clean and tidy?

So the pros out weighed the cons and in we moved.

Mostly it has been pretty fab.

Except that the Council boy racers who whip around mowing the park have smashed into the brick fence a number of times and finally the bloody thing just gave up the ghost and fell over and the Council said, 'Tough shit, we don't have to be neighbourly and pay for half a new one, even if we did damage your old one, so fuck off, and fix it lickity split or else we will land you in all sorts of shit.'

So the insurance company helped us out.

And I painted the long bloody thing with 3 coats of sandy paint mix and then as soon as that was done and looking fab, the boy racers were back and the damage continues. Yeh Ho fucking Hum!

But at least twice a day we open the back gate and Dog does in deed go for a big old romp. She knows every blade of grass and tree trunk and just about every visitor. She is as much apart of the park furniture as the wheelie bins full of dog shit and the bench seating.

So whilst there has been some angst, mostly it has been a pleasure living next to 'The Old Girl'

Until a week and a half ago, the Council moved in a site office and a porta-loo and a rag tag bunch of fellas. They waved their hands around A LOT, and did quite a lot of leaning and pontificating and having smoko.

Finally I could bare the suspense no longer and so I trooped over to the site hut and asked what all the activity was about. See the thing is that a couple of weeks ago there was a council meeting about how to make the park safer from naughties and the overwhelming response was to add some lighting and make the place more family friendly, so I hoped that the fellas were all electricians in disguise and that lighting was gonna happen spit-spot. How efficient had the Council been after the meeting huh?

So it wouldn't have taken a gale force wind to knock me over when the foreman told me that they were putting in a walloping concrete path that was gonna cut right through the middle of the ball games area where the local kids throw a ball around and play a bit of cricket.

What the very fuck?

I am not sure who advocated for such lunacy, or how much it is costing, or how to go about putting a halt to it, but I do know it is a truly shit idea.

I speak to just about everyone who walks their dogs in the park. None of them thought it was even remotely necessary. I rang my Councillor and have managed to speak to his PA and was told the Councillor would ring me back. He didn't. Nor did anyone find it necessary to respond to my lengthy email requesting a halt to the work until the locals had been canvased.

Progress has been appallingly slow, but perhaps in council speak they have been cracking on just fine.

The park has been chopped in half.

There is nowhere for ball games.

I imagine that the path is gonna excite bike riders cos they are now gonna be able to rip right through the park, and I fear for my safety as well as Dog's.

I suppose that as soon as there is a crash between bike and dog and person, then there will be an edict sent down that dogs are no longer permitted to run free.

Who dreams up this shit?

The worker today said that the Council's explanation was that there was a need because if someone walks along the footpath and then onto the grass of the park and they fall over, then they can sue the Council. Sure, people in general have a great deal of trouble walking on grass - I don't think!

I don't know why I am giving this credence, perhaps because the Councillor has not seen fit to get back to me and it's the only explanation, regardless of how thin and ludicrous it is, that I have been given.

I have been in contact with the local paper and they don't seem to give a shit either. The only people who care are the actual folk who use the park. Yep the very same ones who are paying through the nose for the council to build that which they do not want to be built.

How can it happen that somewhere, last October a little group of anonymous council public money trough feeders got together and decided to put a walloping chunk of concrete in the middle of a public park. I am incredulous.

There was no consultation, no notice, no explanation, yet a meeting promoting safety can be organised at a moment's notice. It was well attended by locals and of course it would have been a perfect time to discuss the need for this shitting path. But the silence was deafening.

I am exhausted. Swallowing down bile for days and days at a time is just bloody tiring. Trying to find out What? and Why? and Who decided? and How much is it costing? is debilitating and anger making.

Seriously, what the very fuck?