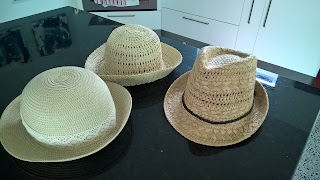 OK, I should have known better. It's Saturday morning and the rain is lightly falling. I live in a tourist mecca and when it's wet the tourist punters head to the shops. The cheap skates with too many small children and pennies in their pockets head to Australia Fair Shopping Centre hunting out bargains to offset set against the rental on their tent spot. The folk with their AmX card loose in their pockets go to Marina Mirage. In this scenario, it would be perfectly fine to staff up your shop with firstly too few people, and then children who are too busy playing on their phones to give a shit about serving anyone. I mean after all you don't expect any repeat business and once the summer is over you might as well close up shop like they do in Greece and go on holiday yourself, until next year, or at least Easter School hols.

Except that that generalisation is just utter nonsense, cos it doesn't include what the locals are doing.

Yeh I should have known better than to front up to Australia Fair on a drizzly old Saturday in the middle of the summer holidays.

Parking up was fine and my little trip into Pillow Talk which was the draw card for the visit was very successful as I snavelled a couple more cushions for the outside couches to replace the old ones which were truly rotten. This shop must make it's money from serving the Locals. I mean not too many people go on holidays and spend their hard earned on cushions and mattress toppers in lieu of the usual souvenirs or long boozey lunches. So the staff here are helpful and pleasant and even looked after my big old bag of stuff until I was ready to go home. This could be because they recognise that they need to give reasonable service to encourage repeat business of the LOCALS, and it might also be because management sees the benefit in employing interested articulate adults. 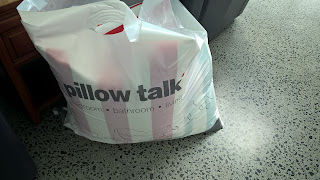 So far so good.

I popped down to Woolies to grab a few bits for dinner and was in and out in a trice.

As I wandered I looked for hats. The truly shitful side effect of the poison is that my hair is falling out and so I thought I might just save myself all manner of anxiety by pulling on a hat anytime I go out the door. I found one I liked in David Jones the other day but the price nearly made me keel over and as I am not sure that I will in fact develop a hat habit I thought I should start more conservatively - yeh that means CHEAP.

So into KMART I went. The hat aisle was pretty close to the entrance which was excellent and I pulled on a few hats and then looked around for a mirror... NOPE! I don't know who buys a hat without seeing what it looks like on, although when I see at some people in the street, sporting all manner of awful millinery, I suppose it's more than I think. So I went in search of the change rooms at the far end of the store and tried 'em on. OK, but nothing fabulous, and they cost bugger all so you sort of get what you pay for I guess. 3 hats which are not hideous and off to the checkout.

I was bullied out of my spot in the self service line firstly by some huge bloke who not only pushed in front of me but 3 other people as well and that just led to an avalanche of pushing and shoving cos the polite system of wait your turn had well and truly broken down. I headed instead to the the old fashioned checkouts. Yeh I was spoiled for choice. Amid this madness there were 2 - yep TWO open. Both looked busy, so I figured it made no difference. Into line I chugged.

I was fourth in line - not too bad, and one guy only had a couple of pairs of socks. BONUS.

But don't count your chickens huh? I looked at the people ahead of me and then realised that this was a huge extended family of holiday punters and they had clearly come to Kmart to buy clothes sufficient to avoid doing any washing for any of the tribe for their entire stay, but they wanted a bargain. For the princely sum of $150 they must have had 40 different items, and each one was on sale and they argued the price of every other one. There were shoes and shirts and skirts and leggings and knickers of all sorts. Now that was some damn fine shopping!

To while away the time, I checked my emails and had a look on Facie and replied to a couple of text messages. The time inched along. About 15 minutes later I was still standing there. I Binged the store phone number and rang and asked if it was possible for them to open another register.

THE GIRL HUNG UP!

NO OTHER REGISTER WAS OPENED.

After I had paid for my 3 little hats, I asked to see the manager. The girl who I think almost certainly had hung up on me, grilled me for my reason for wanting the manager. I refused to discuss it with her and just asked again for the manager. She used the phone to call someone, she turned away from me so I was unable to hear what she was saying but I rather doubt it was polite, and I rather doubt she was speaking to the manager.

Cameron of the 'I don't have a name badge because I was climbing up a ladder' fame tried hard to be managerial but ultimately admitted that he was in deed NOT the manager cos the manager was Michael and he wasn't there.

Ok SO I SHOULD HAVE KNOWN BETTER.

REMINDER TO SELF - NEVER GO TO KMART ON A RAINY SATURDAY, OR MAYBE EVER!

For full and honest disclosure, Kmart ads should include that they are able to offer cheap prices because they are significantly under staffed and those children that are employed really just don't give a shit. And perhaps the store at Australia Fair should have a banner displayed at their entrance to advise punters to enter at their own risk, that they should expect nothing at all in terms of customer service, but that in deed the prices will be cheap enough to reflect third world exploitation.