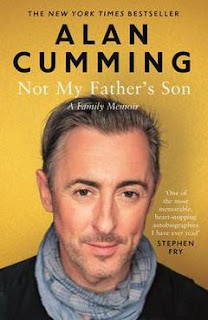 Autobiographies by famous folk, are all too often poorly written and just an excuse to name drop. I know this cos I read a lot of 'em. Yeh I am a tragic. But when I saw this one with a great recommendation from Stephen Fry I thought I'd have a look. And I certainly was not disappointed.

But there is only so much a teacher can do. I taught a lovely boy in London who arrived every day late to school. He was immediately put on afternoon detention. That was the rule. Every afternoon, whether I was in charge of the detention or not I would pop in see his lovely little face, call him out, tick his name off the list, ask him if he had eaten, he'd say, 'No Miss', I'd give him some food and a cuddle and send him on his way. When, of a sudden I left that school, I worried for his well being.

I guess the point is that even when authorities know what is going on, untenable situations can be left to fester.

And what of the poor souls whose abuse is mental rather than physical? Those kids whose behaviour is strange or loopy or mean or withdrawn or even unreasonably upbeat, masking all manner of hurt and fear, more than likely slide by under the radar, cos god knows teachers have enough to deal with without having to psycho analyse everyone of their kids.

I know it is fantasy dreaming, but how lovely would it be if we could all just manage to be pleasant, honest, say what you mean, mean what you say. I am aware that sometimes the abuse is perpetrated by folk with mental illness and this is Mr Cumming's explanation if not excuse, for his dreadful father, but all too often I reckon it's just the frustration of power hungry fools that bubbles over, meanness and anger obliquely directed and the kids get caught in the crossfire.

Sadly asking everyone to be decent respectful individuals so the abuse can stop, is just a waste of a wish, cos most of us already are this and those who aren't will never be.

Oh shit I am turning into a preacher!
Posted by Unknown at 08:24