Is Long Hair just for Girls? 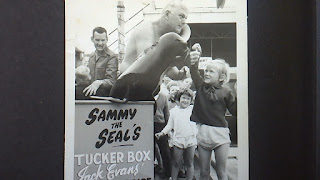 Me feeding the Sammy the Seal, the fella Jack maybe looking bored or is he wondering if I am a boy or a girl and the guy sucking on his pipe is my lovely Dad.


When I was a kid we'd troop off on our typical family holiday. For a long time that meant in an original open plan canvas tent, in the far northern beaches of NSW or the absolute southern end of the Goldie, in the middle of the torrential rain of the summer.

Dad didn't mind. He was a keen fisherman. Well actually he might well have been a 'keen to get away from 3 whinging kids and the wife, stuck in a leaky old canvas tent' fisherman, cos I don't think he cared whether or not his bucket was full on his return.

So he fished and we kids hit the beach.

Dad taught me to swim the old fashioned way, by throwing me onto a wave in medium sized surf and yelling 'Kick Hard!' For shits and giggles he'd occasionally pop me onto a dumper and when I surfaced I'd be giggling and choking in equal measure. I loved the surf! I don't believe his tried and tested method was nearly as effective with the other 2, and certainly the old woman never went in the surf for fear of getting her hair wet.

So, long before there was sun screen or compulsory hats or rashies or 'stay outta the sun at middays,' I was berry brown and had a mane of long blonde hair which would fill up with joy and salt and sunshine.

When I was about 7 or 8, the old girl had had a gut full, of what exactly I cannot say, but it's possible that I was a gobby little cow and had just pushed her too far, or maybe she was a snarky old bitch or perhaps it was a combination of the two. So, in the ultimate act of showing who was boss, she marched me down to the hairdressers and had all my hair cut off. I looked like a BOY. To say I was not best pleased, is perhaps the understatement of understatements. There started my hatred of my sticky out ears and my desperation to always hide behind my hair, until, that is, years later it all fell out as a result of the Chemo. Since then I have been far more sanguine about anything to do with hair. Bad colour? too bad - change it; shit hair cut - never mind it'll grow back ; hair breakage cos or all manner of abuse - suck it up and chop it off and start again. Of course now that it's falling out again I am going through a half minute of 'FUCK IT' but I am sure I will get over it, cos it is just hair. Hair that keeps your head a bit warm and clogs up the drain in the bathroom...just hair.

Anyway as the Grandie has been with us for a great deal of the summer, and as his hair is very long, I am reminded of how I hated the old woman's demand for the scissors. I would very much like him to get a haircut as part of his 'back to school' regime.

And it's not because I think it looks bad, although it does need a bit of a tidy up and he has taken to letting it fall across his face which means that I am forever telling him to brush it out of his eyes. He has great hair! A thick gloss mane of it!

I am worried that the kids at school are gonna tease and bully him about his hair and that will just be the start of another year of misery for him.

We were at the Southport Parklands today and his hair stood out like dog's balls, of course it is possible that I was the only one to think this. I didn't see kids charge away from him yelling out mean things or possies of girls all standing to one side pointing and laughing. But we all know just how cruel and mean kids can be. I feel like his hair is a time bombing ticking away, but really it must be his decision to go the chop.

He said yesterday that he just doesn't want to look like everyone else and I applaud that, I just wish he was a bit older and certainly a bit more resilient cos I watched last year as he crumbled under the bullies and I just don't want to give 'em anymore ammunition.

But maybe he'll become Samson as he swings those great locks. I sure as shit don't want to be his Delilah.