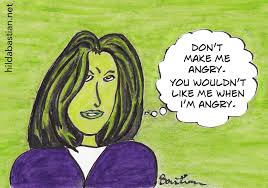 There are some things that we, living in the great land of OZ, take for granted. We know that when we flip the switch by some miracle, light there be, and we know almost certainly that if you are out and about and need to pee, Maccas loos are clean and no-one will care whether or not you are a valued customer, feel free to pee away. We know that regardless of which party is democratically elected, people will whinge about 'em and we accept that almost universally people believe they could teach a year 9 Citizenship class for an hour on a Friday afternoon without loss of teeth or flying broken furniture.

We accept that when we turn on the hot water that it will stream on out scorching hands unless the whole system has been adjusted by the ol' 'elf and safety gnomes. Well that is, unless you live in the Big House.

Sunday is slide into the bath and it's most important cos it's scrape the legs day and then enjoy the clean sheets night. Sure, the tub is filled on other days, but Sunday soaking is an institution, far more reliable than most of the shite that slips out of realestate agents' mouths.

Last Sunday, I ran the bath and then phaffed around making beds and putting away ironing and all that usual crap, and when there was about enough water, in I dove, book in hand, ready for my 3 hour marathon. Except that the water was not hot, it wasn't even tepid! Shit!! This was not good. The bubbles were popping and the razor was sharp, the kindle was charged and Steve was doing whatever it is he does while I float. ( Yeh I don't float and he makes Sunday Roast - I say this for full disclosure.)

The tub was not even half full and too cold to allow a long stay. Bugger!! Legs were scraped and I scampered out. Bugger Bugger Bugger!! I do enjoy my Sunday ritual.

But I shouldn't be whinging too loudly. Steve had exactly NO water, except COLD. He did a bit of a wibble wobble at the machine, but by Monday morning it was clear that it was fucked...That's the technical term I used. When the techie arrived he was more specific but it was just as fucked.

The thing is some whiz bang heat transfer eco greenie thing. It's Government greenie approved and it came with a 5 year warranty, when it was bought and installed, almost exactly to the day 6 years ago. 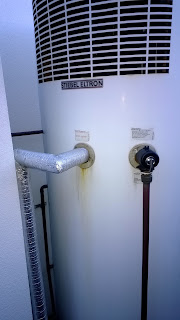 Steve is sanguine about this. The warranty needs to run out sometime, and of course he is right. But how greenie, eco, sustainable, Ozone saving is a machine that shits itself in such short order? The old style electric things, or the gas ones, that work by some sort of non-greenie magic, well they seem to hang in there for decades. This is a lot of kit to hit the bin after only 6 years don't you think?

It is possible that the importers are a little embarrassed cos a replacement machine has been ordered at the wholesale cost to them - yeh right, was that an agent speaking? of about HALF of what ours cost 6 years ago, or maybe they are just all being made in China now instead of Germany. I will be long gone before I can figure out how any of this works.

The machine which is coming from Melbourne or maybe Brisvegas was ordered yesterday and will arrive tomorrow - no delivery charge or at least they had the good grace to incorporate it into the rest of the bill. Not bad huh? 2 days for a walloper thing to get here.

I sold a little toy for Zig on ebay and the winner lives in Tassie. Yeh the little thing weighed in at less than  200gms and apart from the idiot at the Post Office not being able to advise about the best wrapping for it, I selected a bag and paid for the postage of nearly 8 dollars, and then the goober proudly told me it would be delivered in, - wait for it, remember that my hot water thing that takes 2 burly blokes to lift will be delivered in 2 days, only 48 little hours, - yeh it takes 4 fucking days for the toy to make it to Tassie. No bloody wonder that Oz Post is going broke. They need to up the service.

So as I was visiting Bell and Zig yesterday and as we had no hot water here and my hair needed some attention, I packed up the potions and showered at her place. I had some new stuff for hair thickening, some Loreal stuff, that looked very high tech, like some 2 part chemical splodge. I followed the directions and you know what? Bugger me if one of the squirter things was clogged up and so the 2 part complex was only one -part and as I plopped it on my hair, I was just hoping that the other bit that was stuck in the bottle wasn't the bit that stopped my hair falling out at the roots. I hate it when things don't work, even simple things like this. 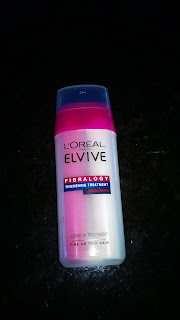 I got a fork tine to it this morning and fixed it.

Shame that a fork or a screwie wasn't enough to fix the hot water thing. 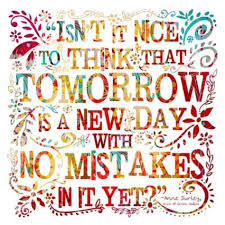