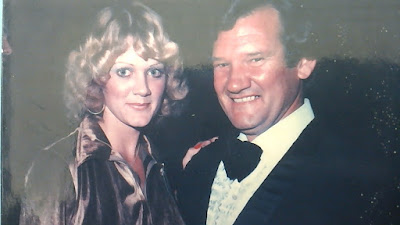 Sometimes, when delusions blur with reality, I see myself as a young woman running gracefully, Bo Derek style along the beach to a musical crescendo that climaxes as I dive smoothly into the waves.

Of course this was never my reality. I have spent a lot of time at the beach, face planted into the sand, boobs popping out of too small togs, and sandwedgies - not the same as sandwiches I can tell you! - though a sandwich would be more comfortable up your gunoo than the other.

I have been thinner but never has anyone accused me of being elegant.

When I was about 18 during another eternity when the parentals were not speaking and the old woman was off overseas somewhere and my lovely Dad needed a 'date' for his men's club's Ladies' Night, I got all gussied up for him to make him proud.

He had given me a handful of cash and told me to get myself something that was good for a formal / black-tie event.

I was a cashed up skinny big titted arrangement, so that should have been easy. I knew what was expected but still bought a pair of velvet flairs and a velvet bomber blouse thing that I really liked - but that I have no recollection of ever wearing again. I plastered on so much makeup that I no longer recognised myself, and had my hair done at the salon....ooo very posh.

Dad, bless him, was not the least bit disappointed or embarrassed as he presented me to his goggle-eyed friends, even as they wink wink nod nodded to each other as they circulated the rumour that I was a prozzie, not the daughter, who they all still thought of a child. And still Dad  was not shitty.

We ate and chattered and drank flash wines and then there was the dancing.

I don't reckon anyone was left in any doubt that I was in fact Ted's daughter after that. We managed to maintain a degree of grace until we didn't. When we buggered up a step, or I flew my arm out and wacked some expensive older woman in the girdle, we both feel about laughing. We weren't embarrassed and it didn't make us feel we should give in to the 'elf and safety police and vacate the floor.

I am lucky that I inherited from my Dad, my disregard for other's opinions about who I am or what I look like or what I do.

And now, older and dozens of kilos heavier, I still don't give too much of a shit. Yeh I would like to be thinner, but even if I was I still wouldn't look like everyone else and the weight hasn't impacted on the way I think. Age may well be allowing a more 'don't give a fuck attitude' which is liberating so I still fling myself about wildly and sometimes end up in a pile of ungainly limbs.

I watch these celebrities and royals all spanxed up and rigid, saying what is expected and behaving with decorum and I feel a little claustrophobic, as I imagine myself looking for a door and a handie big enough to take my jumbo bra and blister making shoes.

I really enjoy stories about Kate and Wills, but here I reckon they are both wondering what force wind is gonna be needed before she looses the hat.

Do you do as you're told?
How far do you follow along the road of social expectations?