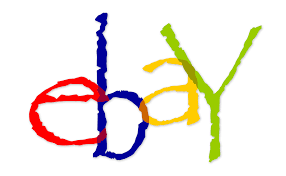 It's no secret that I do love a bargain and I have been hunting for shit online from EBay for a qvery long time. When Steve and I first got together, we bought a little flat at the Goldie that we wanted to rent out but first it needed to be furnished and all that stuff is just silly expensive and as it wasn't for me, and because it was possible, I just went online from London and bought stuff from EBay and it was all delivered easy peasy and then we arrived soon after settlement and we chucked it into place and hung a couple of piccies and called it done. All very painless!

And since then I have bought all sorts of stuff on eBay. Baby clothes and equipment, jewellery, furniture, art supplies, well anything and everything. It can get very exciting as you count down the last few minutes and up your bids to the pre set limits and then squeal with delight if you are the winner.

Sometime back we were cleaning up the garage and trying to chuck crap out and I was filling up the little Mazda and going the big HOIK at the humpity bump. It's a great little car which famously carried a full size bath while we were building the house, but there were a few things that just didn't fit in. So we were at a loss about how to get rid of 'em.

I photographed the bits of - to us - shit and posted it all up on EBay and crossed my fingers. Well it is clearly true - one man's trash is another man's treasure, as people came and took it all away and parted with cash for the pleasure of it. What a seriously fabulous system!!

So yesterday I was faced with Zig's sad face cos he didn't have enough money for some piece of tat he had his heart set on and that the lady in the shop had set aside for him. I know it's important that he gets a grip on where money comes from and that sliding him a sly tenner is not helping, so we talked about how he might make some cash and we settled on selling some of his toys that he no longer finds exciting.

Like many kids his room is like a Tardis, exploding with forgotten shit. He dug around like an archaeologist for a while and fronted with a couple of things he could live without and today I have popped 'em up to see how we go.

I do so hope that I am able to sell 'em, that someone will want to buy 'em and be prepared to pay for the postage too, cos Steve and Bell have said that I just can't give him the cash, although I don't see how it could hurt really, cos I have the goods and who is to say that I didn't want some Skylander figurines and Lego.

Yeh maybe I had better go and put in my best bid....and then I can say that it'll be Local Pick Up Only, and the Salvos will be pleased with the gear when I sneak it into my car and drop it off.