Seeking out the Queen. 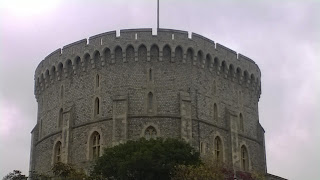 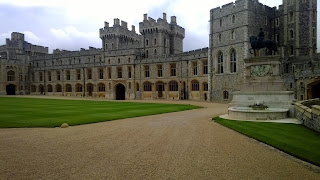 Off on another train trip this time to Windsor. Last time we went and mooched around Eton and had a bit of 'tuck' by the river, but this time we wanted to visit Bessy.

I hadn't visited before cos I have always balked at the price and Steve hadn't been invited in either. We parted with the cash, went through the security sensors, grabbed the headphones - very irritating and were returned almost immediately, and the little info speaker. We were off.

The stone work everywhere is just so impressive. I can only imagine the exhaustion of the builders as they dragged and chiseled the rock slabs. Today of course it would all be besser blocks and concrete and there would be no consideration for arrow defences down the cliff face, but the design and the materials are worth a good look see.

We were not allowed to photograph just about anything inside, yeh I did have a little sneaky click click, or in deed the outside private garden which was quite something. I guessed that the Queen was having a little lie in and that maybe she was planning on taking the doggies out for a walk in her private garden later cos there was plenty of security provided by those fellas with the big tall black hats  marching up a storm and looking terribly glamorous. I was thinking that just standing there with that walloper on my head would use up enough calories to  allow for multiple Mars consumption. 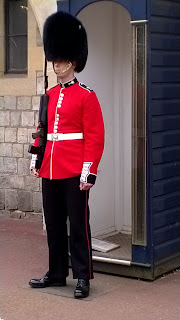 They do a little march around on their patch and then stand stock still. I reckon they must have wonderful imaginations cos while they stand there eyeballing an odd bunch of tourists, many of whom are doing their level best to make 'em laugh or at least have a little smirk, their minds must surely being going like crazy. I like to think that at the end of their shift they sit around having a pint, sharing silly stories about the folk  they 'entertained' that day. And if you spend even a few minutes just perving on the others poking around, well , I reckon there must be plenty of stories for the Big Hat fellas to share.

The 'Apartment' areas are spectacular, from the embossed wallpaper to the sparkle-arkle of the chandeliers. The rooms that are perhaps still very occasionally in use have beautiful rugs but the other more museum styled rooms could do with a bit of a carpet spruce up. I am hoping that our entry fee of not much change from a 20, could find its way onto the floor. 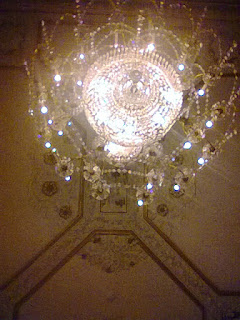 Oops, my finger just accidentally tapped this one.

If you have a china obsession or an attraction to old portraiture, then you could spend literally hours mooching around, but I whipped through these bits and I admit that Queen Mary's Doll's House was more than a little claustrophobic for me.

The indoors is definitely worth a nosey, but for me I enjoyed the sheer scale of the buildings from the outside.

If you've got a good few hours to spare, I reckon a good romp around the castle is a must. The people who visited the day before us got to have a gander at the Queen with the doggies, and that would have been the cherry on my visit.