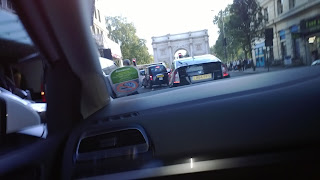 Travelling from one place to another, whether it's hundreds of kilometres or just going across town, is something that Aussies take for granted. Get in the car and go and get there and yippee, no problem. We often get up and think oh a coffee at Byron Bay would be good, so in the car and drive for an hour and voila there is coffee. If I want to visit Belly, it's in the car and go, 50 minutes later I am having a cuppa and a cuddle.

Distance is considered and sometimes the weather, cos god knows it's no fun driving through cricket ball sized hail or worse still, cyclonic winds where dodging falling branches and trees requires a skill that I just don't have. But if google says it's gonna take 50 minutes to get drive 80 kms then that's usually pretty right.

No so however in London. 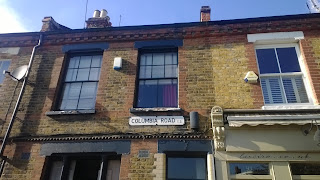 Twice no we have set off on a book adventure courtesy of Carol. And the London traffic is 2 from 2. We imagined that yesterday, being Sunday, would be a good day to go to Columbia Road. There's a flower market there and lots of wonderfully quirky little stores. The flowers are only there on Sundays.

It's not very far as the crow flies, maybe 20 kms

Parking was ridiculous! Except that we had pulled up and parked on a single yellow line which by all accounts is legal on Sundays, and a friendly bloke walked by and warned us off. Very helpful he was too. He had pulled up in the private parking spot of a council house dweller, and as he was a decent friendly sort of bloke he told us to take his spot and just say that we know the Real Estate agent. He said that the tenants don't drive. I wondered about the irritation factor of having strangers just pulling up right outside your front door and parking in the spot you are paying rent on, but the frustration of 2 HOURS  in the bloody car led to a serious delousing of ethics. We parked up and did a runner.

2 hours in the car also led to a serious peeing issue, so I ran - well not literally you understand - into the first pub and there were signs up saying 'For Customers Only'. Ethics shredded again - Ahhhh. 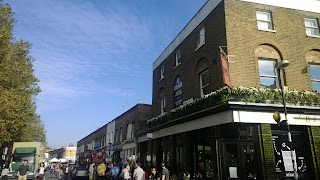 The Birdcage is the Peeing spot, but do please have a pint there too. 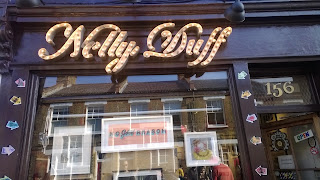 One of the many quirky little stores.


And then we wandered. Often times it was a bit of a jostle which is not pleasant and people's bad manners driving them to push and shove gave me the shits - yeh I know this from the car park stealer and the illegal loo user.

The place is lovely. There are the most quaint little stores selling all sorts of stuff which you may not want to buy but that are cool to look at and sometimes laugh at. We picked up a couple of pieces of silliness but mostly we just looked and chattered.

Then, like Phantoms we flew into the car and took off before the residents came out and vented their spleens.

It took the glamour out of the equation.

We inched our way along streets where there was nothing to see, but along The Bayswater Road, where the artists display their wares on a Sunday, where if we had inched along I would have happily had a look see, well along here, as you might gather we flew! No traffic hold up until we were painting free and then it all snarled up again. How the bloody hell does that happen?

At least if you are on the tube, there is no traffic, nothing to see but no traffic, and if you go by bus, the traffic is still shit, but you sit up high like royalty and the views are excellent, and there is no bile build up because of cars shoving their way in and idiot tourist not having a clue where they are going.

So, I am very pleased to have been to the Columbia Road Flower Markets, but I am less pleased that we spent twice as long on the roads getting there as we did wandering.

Next time it's gotta be public transport, which in London is excellent. 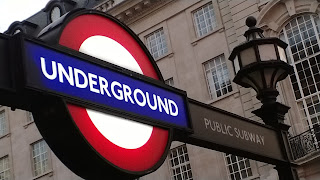