I am soo not very Chanel. 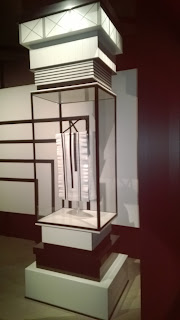 
I did a  very Pommie thing yesterday - I saw a que and I hopped right on the end of it.

Last week during an adventure, we stumbled upon the Saatchi Gallery at Sloane Square. I think it used to be in the Council building next to the London Eye and I tried to go in there once, but it was a silly price so I didn't and so last week when we found it I noticed that there was a FREE ENTRY and so I was determined to pop back. Yesterday was pop back day.

Well actually it was I failed at Harrods cos I got duped by some odd ball social media prank, into believing that the wicked witch's shoes were pointing out of the front door of Harrods and I thought
I 'd pop in to get a pic to send to Zig for Halloween. Big Fail, which had obviously kept the security guard on duty very busy. It was pissing rain and I wanted to be able to put a tick on Wednesday in my diary, so I fiddle farted on the tube and popped up at Sloane Square to toddle off to the Saatchi.

The line was a long winding array of colourful umbrellas often held precariously by women dripping money from head to toe. Well mostly I was looking down so I could avoid getting those spikey bits of the umberding in the face, but the shoes were a real feast. I reckon if I had a tenner for every hundred covering those toes, well I could afford to buy a few pairs myself.

Their hair was 'done' and most had a full face of sometimes a little strange makeup. They were a 'good to go' group of women, who could have been auditioning for extras in Sex and the City. I didn't know what had brought them all to this place in the rain, but I wondered if like me they had all had a bit of a failure in the morning and were looking to right their day.

The line seemed to be moving reasonably well towards what I mistakenly thought was the front door, but instead, it was just the entrance to a somewhat straggely garden which finally lead to a security zone and then a windy line that would not have been out of place at Heathrow Airport during a terrorist alert.

I was gonna give it up as a bad job, cos I heard someone say that they had done the maths and it would take an hour to meander through the 8 or 10 lines to get to the umbrella wrapping station, before being allowed in, and as I was still not sure what 'IN' was gonna show I debated about staying. As is often the case however, I soon got too far into the line to easily get out. My very unfashionable hair do was attacked by the twit behind me's umbrella and my thongs were a constant source of amusement, amazement and disgust in equal measures.

It was the Chanel Show, no wonder there were so many little knock offs over the ladies' arms. 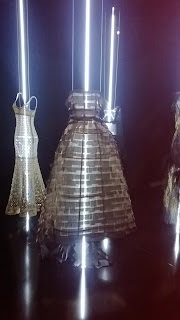 These dresses are beautiful, even if not for me, but I must be getting old cos the room was so dark, just wished they'd stump up the cash for more lighting.


The exhibition was ok, and might have even been a little bit fabulous if not for being herded around like sheep, 'move along please'. I reckon I have heard the same dialogue in prison shows. There were some interesting bits and people who had downloaded the app were playing the tape rather too loudly. There was quite the frenzy inside, but as I was carrying my charity shop handie and my thongs were wet, I suppose a lot of it was lost on me.

What was cool was the gallery itself. I enjoyed making my way around it. There are hidden corners and the ebb and flow of the space would make for a great display of stuff, especially if you were keen on it all.

As it was, I sometimes felt more than a little claustrophobic and in deed, one room was just so dark and full of gaggle that I just didn't venture in. There was a trail of rooms strung with metres of fabric just hanging down and I got the idea that Chanel was into monochrome fabrics of black and white in different textures, but as I wandered through, watching everyone finger all this fabric, I worried about the spread of germs and felt a little sick thinking about the state of the material when all the lights were turned on. 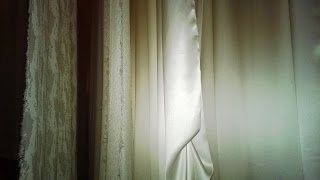 This vast display of fabric textures is a Flu outbreak just waiting to happen.


On the top floor there were practical workshops for folk interested in gluing up a bit of bling with sequins and feathers and stuff. This looked interesting. and there was a perfume making workshop where I imagine you could whip up a bit of your own Number 5. 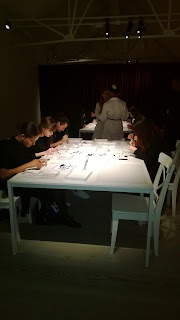 
Then not so much because I was tired but because it was empty, I grabbed the lift and was outta there. 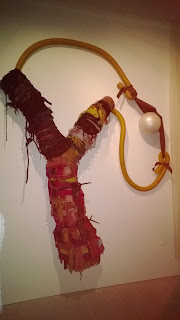 There were a couple of these sculptural pieces scattered around and they were by far my favourite things,