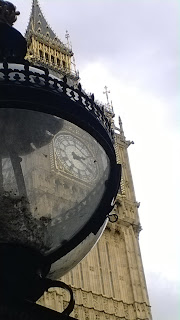 I have been around the old Houses lots of times but had never ventured in. It was time - District line tube to Westminster and you are there. How easy is that? But it must have been free day at the chinese brothel nearby cos the place was heaving! When we got close by, I saw a Bobby and in my very best Strine twang I told him I wanted to have a gander at the House of Commons cos I had read it was sitting. He was a kindly bloke and he gave me a lamenated green card which we used to circumvent the fucking long cue which seemed to stretch forever. The Green card cue was teeny weeny and we waited a couple of minutes to get zapped in the metal detectors and then we were off and running towards the debate chamber. We did have to stop at take a look and some illegal photos at the tiles on the floor, which really were the biggest draw cards for me, cos they appear so often in the Pommie tellie I watch. 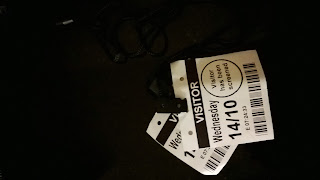 Silly pic of Old Ben.
Flash little ID things to show you have been through security.supposed to give 'em back but being a convict I nicked 'em 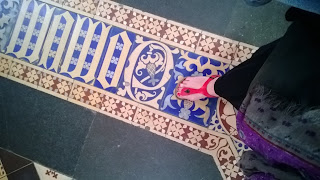 You have to turn the flash off and the sound of the clickety click off so you can get some pics. The thong is just to show that it was me. There was writing in the tiles but the philistine in me didn't allow any clue what they were saying - possible fuck off Aussie in the most polite Pommie slang? 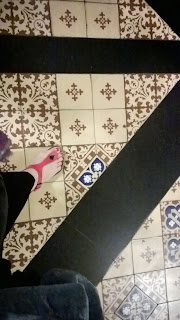 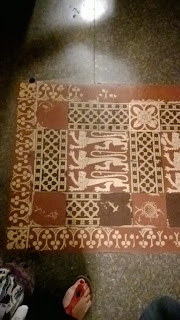 These are the tiles on the way to the House of Lords. I was singing, '3 Lions On my Chest da de da' and Steve kept telling me I was getting it wrong and then the supercilious jobsworth twat had a fit about the photos ha ha I had 'em anyway!

Be warned there are about a million stairs to get to the public gallery and when you get there, it is OK to be a little underwhelmed.

There was some debate about Government Devolution - what the fuck does that even mean? Yeh I know ho hum. The bloke making the point spoke and there were a handful of folk on either side NOT listening to him. They read the paper, played with their phones rattled other paper work. I reckon for the money they are paid, attendance by the MPs  should be compulsory. Where the fuck were they all? If it was important enough for the bloke to stand and deliver, then they ALL should have been there to catch it.

We didn't stay too long cos to be honest it was pretty boring once you had checked out how the huge glass wall that separated the gallery from the members had been exquisitely cut to accommodate all the mouldings and furniture. Bloody careful work that, reckon they would definitely have needed a template.

So I managed to get through the day without getting arrested or even pissing too many folk off.

The place is amazing and I reckon you could do it in a morning, but it might be wise to arrive after the opening rush hour to avoid the crush and if you can manage a twangy accent then that couldn't hurt either.