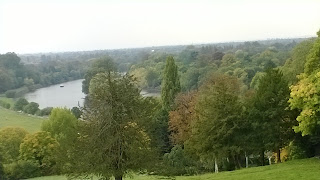 This is a view from Richmond Hill. It always surprises me that there is this much RURAL so close to town.

Yep the summer is folding itself away for another year and people are dragging out their winter woolies. The colours up the street might be going quickly from the brights of summer to the typical black, that goes with everything, but the trees are putting on quite the colour show. 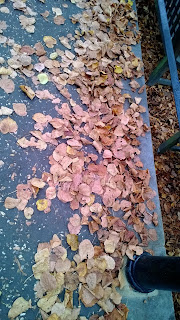 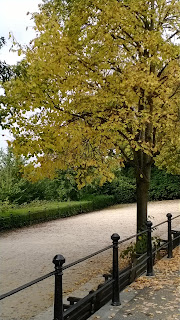 There of course is no such seasonal change at the Goldie. For me there is the long lament as the little light cardie worn only in the evenings is washed and tucked away for another year. This happens in a single 24 hour period. One day it's ever so slightly chilly and the next day you are sweating buckets and looking to take off as many clothes as is possible in polite company.

The closest thing to a seasonal change that we get is when I see that the bindis are about to flower and I call the Council to put the weed killers to action.

There really is so little change. Oddly though, people, well actually it is mostly women, do pull on seasonal clothes more out of boredom I reckon than anything else, cos why else would they endure the resultant toe rot caused by sweating in long boots? Just because people call it winter, does not make it cold.

So nothing actually FALLS at the Goldie, unless you count my spirit as the temperatures rise and that is not at all what FALL is supposed to herald. It's the stripping naked of the trees and the closing down of the grasses and the bushes.

Yep FALL is lovely. It is a real thing here in the UK. The colours and the wind whipping the leaves, well it's all very romantic, unless of course you are hurrying somewhere and the leaves have slimed themselves together and you tumble arse over and break a hip. I guess, for the locals who are rightly ever vigilant about such perils, FALL might mean 'Watch out, Don't fall.' and 'Why the fuck has the Council not cleared the leaves?' and trains are delayed because of 'Leaves on the tracks'.

Richmond Park is huge and even when it is crowded, it is still pretty empty, and it puts on an excellent FALL show. The mist and the colours don't translate too well onto my old Nokia phone, but the images are in my mind so I am smiling.

There has been a local story of a park being closed to the public because a stag has been making a right royal randy pest of himself in this the rutting season, so I wanted to again see some of these wild animals in a public place not a zoo. We did the ring road of Richmond Park. There are so many Bambis now that it's like being in a David Attenborough documentary - bloody marvellous. 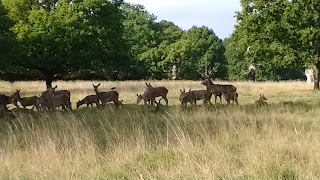 Richmond Park is definitely worth a visit if time permits. It's huge and reasonably central at least if you are in West London, and it's free. But do wear your yomping shoes.