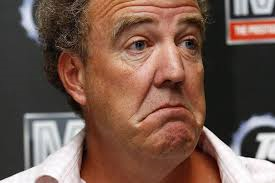 So Mr Clarkson has lost the plot and wacked his producer in the head and the producer took himself off to get some ice and sympathy.

This happened at the end of a day's filming in Yorkshire northern England.

It was late when work finished up and it seems that when they arrived at the arranged hotel, the kitchen was closed and there was no dinner for them.

So now I am just surmising about the rest of the untold saga.

I reckon the production team had probably worked a long day and were on the tooth when they arrived at their digs. Mr Clarkson is not a little bloke so could have been more famished than others say the size of Mr Hammond.

An order for food was put in and the Kitchen Closed sign was rudely thrust in their faces.

This happened because the Hotel is run by people looking to use it as a tax dodge and if they made a profit for the BBC visit it would upset their plans to cry poor or to fully launder their ill gotten gains.

Mr Clarkson slumped into a sugar low - he was fucking hungry after all, and he came to, punching at whatever / whoever was around and sadly that was the producer.

He told his BBC bosses that he'd been naughty and they took a few days to decided that he had to go. His contract was up at the end of March anyway and this meant they could save a bit of cash on the legal - eagle bits and bobs.

The BBC stood Jonathan Ross down and sacked Russell Brand cos they rang Manuel and were pretty silly. The BBC have to be seen to be a little pillars of propriety cos it is spending public money, but really sometimes PCness just gets taken too far.

It might of course all be a bit of a hoax perpetrated by the very clever Mr Clarkson cos he has a new idea, and the thought of  another year phaffing around in cars with his boy mates was just more than he could bare.

Anyway, I hope that the show does not go on without him. It'd be a fitting end to car madness that a knuckle sandwich in the depths of Yorkshire should herald the chequered flag to Top Gear.

Vroom Vroom
Posted by Unknown at 15:25