Elf and Safety at it again. 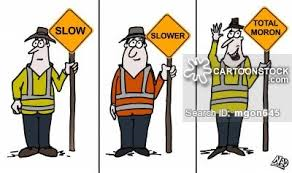 We thought we'd take a leisurely drive down the coast today to Brunswick Heads. It's a bit less than an hour's drive, unless of course the council somewhere decides it is necessary to dig up a bit of concrete on the far left side of the left hard shoulder of the road.

This was the case today just before the Tugan tunnel. 2 lanes needed to merge into 1 and that meant stoppity stoppity stop stop, little bit of start for bloody miles. We figured that there must have been some enormous smash up between 25 cars and a truck for good measure and that countless folk were either dead or seriously maimed.

We inched our way forward while discussing the much debated idea that if an accident happens as you open your car door and a bike rider is flung off as they ride passed you, not the obligatory 1 metre away, while undertaking a truck, then you should be found guilty of something terrible increasing to murder if the biker unfortunately dies.

We wondered when and in deed how accidents became illegal. We are a 'Blame Game' society.  When something bad happens, it means that someone else must be responsible. So when I had cancer, it must have been someone's FAULT. Shit I hope it wasn't MY fault, much better if it was someone else's because then I can lay blame and maybe even sue 'em, maybe get 'em locked away. Yippee!

This became a lively discussion and I suppose it was lucky that we agreed on the idiocy of it all.

2 lanes did in fact merge into 1. Soon after there was a walloping truck with an electric sign more than a storey high with a graphic of a someone digging dirt, and a 40km speed sign. There were the usual bright orange witches' hats shoving the cars over to the very right lane, leaving free the left lane and the hard shoulder. Because of the positively glacial pace we were going, we had more than sufficient time to count the workers and observe the work being carried out.

After the big truck sign thing, standing safely behind the barriers, were 2 blokes about 20 metres apart leaning on SLOW signs. I wondered if the signs were meant to be instructions or descriptions of the holders - maybe for a surprise both - multi purpose! That would be more unusual for the council. How wonderful.

Just a little further on there were 3 more blokes milling around on the edge of the hard shoulder, one was pushing on a jack hammer, the other 2 chatting. Maybe they were doing rock paper scissors to see who was next on the machine, or maybe they were texting through their lunch order, or maybe they were calculating where the closest loo was and whether they should even be 'on the job' as it was too far away. A small bit of concrete was being broken up. Why we couldn't say, perhaps because it was there.

I didn't know what was being done, but I would bet that if it were being carried out by a private contractor not beholden to any unions, it would have been done more efficiently, for less money and with far less disruption to the traffic.

The cost of the blame game and the old elf and safety bastard is out of control.

Doers are being outnumbered by tellers. I wonder what happens when the doers really get the shits up with being told by people who haven't got a clue.

Is a little revolution possible?

I doubt that the blokes with the SLOW signs will get a look in.
Posted by Unknown at 17:28