Sundays in the Burbs and it's Father's Day too. When I was a kid, I reckon I could smell Sundays.

My parents for a long time used to dispatch the 3 of us kids to church, I am guessing so they could have some 'time to themselves'. We'd rip open the offertory envelope and buy some sweeties from the one shop in the world open on Sundays and sit at the back of the church, stuffing lollies down our gobs, while old Father Miles yammered on about stuff. I wondered how come it could be so important that kids needed to hear it but the parentals did not.

Church bored me stupid, but I did like the smell of the smokey thing someone would sporadically swing about and the odd old stale cool of the place. I felt like the building might well collapse if anyone actually dared to laugh out loud. I wondered for a long time why being Godly meant being stern and strict and humourless.

When it was done and we had chattered to other similarly dispatched kids, we'd walk the 2 kilometres home. In the summer time it was HOT HOT HOT.

You could smell the heat coming off the bitumen mixing with the just cut grass smells and sometimes the sweetness of car shampoo.

There was a quiet slow slither through the day. There were few cars on the road and there were people in the usually empty yards. There was no chance that a kid could nick any flowers out of someone's garden on a Sunday.

The shops were closed and there was bugger all to do except entertain yourself.

But Sundays had a smell. The twilight brought that wonderful greasy smell of almost burnt cheese on toast and the smell of freshly ironed synthetics ready for the week ahead.

Dad had a stubbly face which was his weapon of choice in all games of tickle and rough house. He just smelled of Dad, no aftershave, cos there had been no shave.

It was and is still, a time to seek out favoured rellies and friends and head out for a picnic. Food just smells and tastes better outdoors. People tend not to bother with their Sunday best anymore but my Poppy bothered, always, right down to his hat, even in his declining years, when bloody Parkinsons was eating away at him. When I was a girl, Poppy used to call in on weekends, with lollies in every pocket, and so time rolled into these moments before he died when he allowed baby Bell to feed him marshmallows.  Ah Sundays and Dads and Poppys.

Today in the burbs, the smells are similar if more than a little diluted. There are definitely fewer cars on the roads and people do walk more. The park is a magnet for folk and their dogs and children and parties and the canal is the road for well off kids in their dinghies and even better off adults in their flash looking boats. The parade is lovely to watch.

So today was poached eggs and toast and homemade coffee and gardening and weed killing and planting. My old cheesey toast has long since been replaced by Steve's roast dinner. The smell is different but it heralds Sunday evening just as loudly. 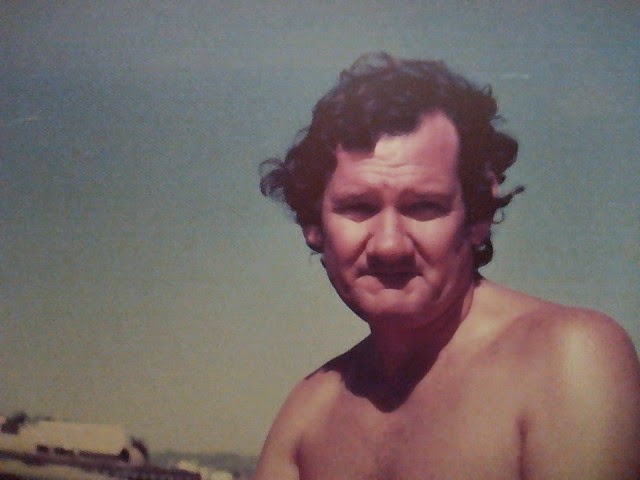