Life is simple when you are 8 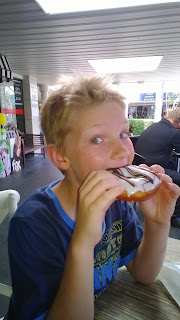 Zig is down for the summer. Well I am very lucky really because I get to play and listen and tease and feed and spoil and thoroughly enjoy him. His life might be a little more complicated than other  kids because he needs to manoeuvre between households, but really it’s all pretty simple.


He just wants to be loved and that is a very simple task for me.


So today we were up at some silly o’clock and then we chewed up some cereal and took Dog out because it was ‘her turn’, then it was into the pool where Zig did his 10 lengths and played and played and wore out Dog.


Yesterday Zig asked if we might be able to paint a picture of him eating a doughnut so that was the impetus for morning tea – well not really. We always have morning tea in the village but I did take some pics of him eating the treat!


The village houses a number of those bloody machines which entice kids to throw good money after bad and he looked longingly as we passed by them. He decided that a reasonable charge for scrubbing the park picnic table where Nik and I often sit, would be 2 dollars.


He scrubbed and cleaned and I inspected and paid up.


I am nervous about anything bad happening on my watch, but I reckon that it is pretty safe for him to trot over through the park to the village shops, so for the first time ever he went on his own and came back with some ghostly slime – courtesy of his toil. This goop kept him entertained for far longer than I would have thought possible and I was pleased that very early on I deemed it an ‘outside toy’


We shared some grapes for lunch and then we had a little cuddle while we watched the end of ‘The Grinch’, he read his ‘Captain Underpants’ book and I put away all the ironing.


Now he is splashing in the pool very patiently waiting for me to join him. It’s not a big ask really.


Life is just so simple isn’t it when you are 8.


A shame it is not always thus.