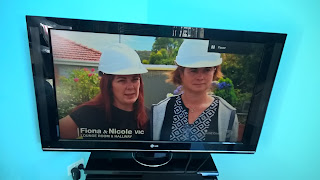 Any Aussies watching this show? Am I the only one who is shouting shit at these 2? Yeh I can see the dust too.


My Name is Sue and I am a TV tragic.

I will watch any old sort of shit, and if it is really shit shit shit, I will play channel shuffle and watch 2 or 3 or more lots of shit at once. Yeh I am an addict. I can't imagine a day when I don't have the box on. I speak to the characters and shout abuse at the ones I don't like. I rouse at news reports and reporting and loathe it when shit goes down on the tellie which is just too fantastic to be real, but is presented as absolutely authentic, cos I do hate it when the TV assumes I am some sort of dickhead. How very fucking dare that machine treat me like a fuckwit?

So I am about over the cooking shit shows cos they just make me feel lazy, which I am, and a shit cook which I am not always. I record Masterchef and whip right through it to the end to see the final dish and see who goes home. I am over all the pseudo tension build up of ooopies and mistakes or the fake confidences which are almost always followed by failures of biblical proportions, after all, pride cometh before a fall.

But I am still hooked on Survivor even after all these years and while I watch the recorded programmes so I can skip through the ads, I watch every conversation and spend time trying to work out what is gonna happen, and I like to watch it in a very timely fashion cos I like the tension of wondering, not the knowing cos I saw who was voted out on social media.

And I am embarrassed to admit this, but I have been reeled into HOUSE RULES, this season. Of course it is all bullshit. The people do about fuck all I reckon, oh they might slap around a little paint, and I believe that they do go to shops and buy stuff and then they carry some of it into the house and pop it into place. I don't believe that these people have been living in the houses. I believe that someone in TV land found the houses and made up a story and found some unemployed, or maybe unemployable folk who fancy getting their faces on the tellie for a couple of months. I believe that the directors and writers position the viewers to have sympathy for or love or hate the supposed renovators. Let's face it there has to always be a villain to keep us interested, so lines are written and rehearsed and delivered and edited, and played on the box, and we are encouraged to believe it's all true.

Well except for those dreadful women Fi and Nicole. Yep I have totally bought into their bullshit. And I think it's cos they are old enough to know better. They are old enough to think for themselves. They are old enough to tell the TV people to fuck off when they come up with more and more extreme bullshit, and they are old enough to be able to work out just how they will be coming across on the box. SO as they are presenting as 2 just hateful, bitter, not very bright, bitches, some of it must be pretty close to the mark. I dislike these 2 A LOT, especially the long haired one. Yeh  admit I have been shouting at the tellie. I am wishing them all manner of misadventure. I'd like someone to come along in the dead of night and run a chalk coloured tattoo line right down their faces.

And I wouldn't mind if one of those ridiculous hard hats that they are all wearing was mysteriously filled with cat shit and piss and we could watch it drip down someone's face. There's an idea for the director...just a 'Thank You' will do.