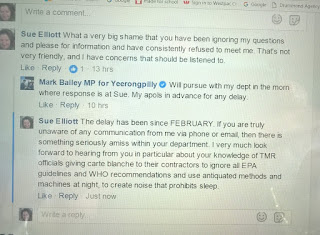 Nah this is NOT gonna be about that Twitter account of the small handed orange man, but please, someone stop him! For fuck sake!

I have been on the arse end of some very unpleasant social media comments because if you put your face out into the public arena and you make a statement, then people are bound to leap at ya and say mean shit from the safety of their study or lounge room or toilet - from where ever it is they spew bile. So I am getting better at firstly NOT reading the shit, and secondly, perhaps more wisely still, not replying to the shit.

I am all very keen to continue with discussions, even feisty heated ones so long as there is no name calling and personal meanness. I think that social media is an excellent tool for sharing opinions and information.

I follow a number of CML forums on Facebook and sometimes the posts are funny or informative or sad and sometimes they are entertaining and sometimes boring, and sometimes they ask for very specific advice and as there are not many of us with this fucking disease, we are mostly happy to share even disgusting details, if it might help alleviate another's concern and we share tips about timing and topical shit for rubbish skin and how to deal with the tireds and disappointing people cos we can't go somewhere or do something. In any case, this part of social media I find helpful.

And I follow an number of other groups and individuals on social media. Some are a bit famous, and some are funny and some I know very well and some I am yet to meet.

I enjoy my local MP John Paul Langbroek's posts and sometimes make a comment. He nearly always replies. I have met him, but we are not FRIENDS. I don't reckon he replies for any reason other than he's interested in the conversation, cos he's my MP and he feels he has an obligation to his constituents  and to fulfill that obligation, he needs to listen to 'em and understand their situation.

Out of utter frustration last week I found MARK BAILEY Minister for Main Roads on Facebook. I have been waiting for a response from him about the appalling secrecy involved in the government contracts with the local contractors, since FEBRUARY.

I 'liked' him on Facebook, even though I had never met him, mostly cos his office refuses to make an appointment for me to see him, and in truth, I very much doubt I would 'like' him, if we did meet up.

And because of that 'like' and the way Facebook works and because his press people pop shit up online presumably to make him seem cool and hip and groovy, I get updates about his gallivanting, and pictures of him with smiling youngsters wearing political slogans all over their chests. When I saw such a photo with a caption about how he loved being out and about listening to the concerns of his people, well my fingers went all a quiver, and not in that lazy morning before the sun comes up, good way.

I wondered about what to say, cos I certainly don't feel like he's given any consideration to my concerns. But you catch more flies with honey than vinegar so I was polite, not pleasant, but not down right rude either, and that's what I wanted to be.

I figured that his handlers would immediately remove my comment. But NO bugger me, I get a reply pretending to be from the man himself saying he'd look into it. So my itchy fingers went at it again.

And I don't suppose anyone will be surprised to hear that I am still waiting.

It will not surprise me if they/he unfriend me, and I will not be upset or wonder about it, cos as I said we were not and are not and will not be friends.

But it makes me wonder. Just like the Orange dick let loose on Twitter, how does anyone in politics make good mileage from social media? JPL seems to manage pretty well, but maybe that's cos his handlers jump onto any meanness with their delete finger at the ready.

But a reasonable rule for 'em might be just to NOT REPLY. Cos once there is something out there in the public domain it's impossible to get it back. Sure the servants of the public, and you know how loosely I use that term, sure they can deny receiving phone calls or emails or letters and pretend they responded but emails and letters have gone missing, they can put the phone down at anytime siting bad language or shouting as their excuse, they can speak in government bullshit speak and take a very long time saying less than nothing at all, cos even though they warn you that calls are recorded( wouldn't that be useful sometimes?) and you get automatic email responses, they just deny deny deny.

But with social media, well there's just no 'take backs'.

There is now a public record of Mark Bailey saying he would get back to me, that he'd look into the delay and there was an apology too. Of course this could be me overstepping what was actually said, cos he did not say he'd look into  the whole sorry mess - just the delay in responding, he didn't say he would ever answer my direct questions, he didn't say that he'd put a stop to the secret silent agreements that give governmental permission for appalling noise and outrageous behaviour, nah he didn't say much of anything at all.

So perhaps his minders are better at all this social media malarkey  than I gave 'em credit for.