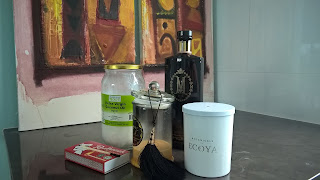 
It is no secret that Sundays are bath days. This is not to say that for the rest of the week I just get about progressively more stinky from one day to the next and waft powder into my hair whilst sticking snuff shit up by nose - no I am not gonna make a comment about all those cocaine losers over the weekend. No during the week I just throw myself through the shower, which is a perfunctory task and brings very little joy - not none but not much. So on Sundays I slide into a bath, yes, sometimes for hours at a time.

Stevie has always spoiled me with all manner of bath stuff, smelly stuff that is sometimes so cloying and lovely that I can still smell it in the bathroom on Wednesday. AHHH just lovely.

I like a deep hot soak with millions of bubbles and I light a candle for extra pong. I load up with my Kindle and sometimes a glass of stuff and maybe some sweeties or some cheese. People could be forgiven for thinking that I was actually moving into the bathroom, never to return.

But recently some of the joy has been lost.

The Poison Meds are playing havoc with lots of parts of me and also of course killing off the mutants. On an ordinary day I might have 3 or 4 side effects not really worth banging on about, sometimes I have to call an ambo cos I am crying with fucking hip pain. But generally I am pretty good - Stevie might beg to differ.

But the constant thing is that my skin is a bloody desert disaster. I have been downing antihistamines since the beginning of this little adventure cos I broke out in very attractive rashes and old gal acne, and the little orange pills stop me from scratching the be-shitter out of everywhwere, and I do mean EVERYWHERE. But ultimately, there are still occasional little upsets and my skin all over has taken on that crepey crappy thin scaley look and little bits flake off into the breeze. Yeh Hansel and Gretel would have been pleased for the help, when they ran out of breadcrumbs.

So hours in a decadent chemically scented hot as Hades tub, is more than a little counter effective in treating the scale and the scratch.

Yesterday I poached in lashings of coconut oil and oatmeal.

2 heaped tablespoons of solid coconut oil - 4 I guess if it is melted, and a cup of oats stuffed into a sock held closed with a hair tie, all shoved into the bath, and in you slide. Slide is seriously what you do, so unless you want a real reason to call the Ambos cos you broke your bum bone or something else - so do be careful.

The water can't be 'Frog Jump Out' hot but it's still pretty relaxing. The candle was on and the kindle was charged and soak away I did. Not for a marathon - Stevie was surprised when I re-entered the world before my usual time, but today, I have not been scratching up a storm, so maybe a final change was necessary.

I have been slopping on the coconut oil on and off for a year, but I haven't really wanted to say goodbye to my divine Sundays with all the gorgeous potions. However it seems like it might be necessary. Bugger.

I sidled up to Stevie to give him a whiff of my new bath perfume and he said I smelt like soap. I guess that's better than stinking of stale sweat. I thought I smelt like an old fashioned bakery. Tomatoes V Tomatoes
Posted by Unknown at 10:21