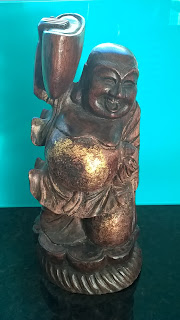 Here's my souvenir - a smiling Buddha, equipped with sharpened teeth and he's wearing a dress.


Travelling through time zones is such a difficult concept to me. I just find the idea that somewhere else it's a different time, difficult, well very difficult, virtually fucking impossible. Not because I think the world is flat, or because I think I am the centre of the universe, well mostly I don't, it's just because I find it tricky to imagine.

So this little Stevie sojourn was to Thailand to visit with a mate of his and to go on a little tour around parts unexplored. Thailand is 3 hours behind the Big House, and for those who are similarly handicapped, that means that when it is my 9 o'clock in the morning, it is only 6am in Thailand, and that is much easier to work out than when Stevie is off in his homeland where the difference is 10 or 9 hours and when I have to take off 2 or 3 hours, or maybe I add them on, and then go to the other side of the day. It doesn't matter how often he heads away, I need to work out the formula again cos it doesn't stay in my head. And when I am in London and I am trying to Skype the kids, working in reverse does not come easily to me either.

I am a world time zone fucking idiot.

Anyway, even though he was at the blunt end of the plane and has had a ridiculously interrupted sleep as he ran like a maniac through Singapore's airports to find 2 trains to catch his connection to Brisvegas and then had dinner and avoided breakfast before getting on the train to the Goldie after hare-arsing through customs and immigration, he seems remarkably fresh. (It took him longer to get home by train, on the last leg of the journey than it did to get from Phuket to Singapore, but that's just an aside.)

Me, on the other hand, well I feel less than spritely. You see I waited up to hear if he made the Singapore connection which he obviously did, and then had trouble going to sleep, cos I wanted to be awake in time to send him a welcome home text at silly o'clock this morning, which I did.

And I sort of had a little schedule planned in my head that after I had sent that 'hello', I might snooze for a while and then get on with things, but bugger me if his plane wasn't Elliott Early and he had somehow vapourised himself through all the usual shit and was happily sitting on the train! Fucking hell! My 3 hours had become an hour and half so that meant screaming into action. Cos you know, I had to get sorted for my fella, and that meant I had to wash my hair and draw on some eyebrows, and find something half way decent to wear and down a cup of tea and tell Dog her Dad was coming home and make my way through school hour traffic without getting nicked for another speeding fine.

It was all pretty frantic.

He seems happy to be home, although there is a certain lean to his walk that tells me he needs some sleep, and I rather expect that he will slump in his chair tonight after his welcome home dinner, which unlike anything he's downed in the last 2 weeks, contains no chilli at all. He might be awoken by swearing at the tellie as I watch House Rules, because this was my dirty little secret, but whilst he was away it has been promoted to my dirty little obsession - watching it tomorrow or the next day just won't do.

Scents of slow cooked lamb in red wine and lashings of garlic are filling the house and Dog is a waggy tailed crazy girl cos her Dad is home.

All's good at the Big House.