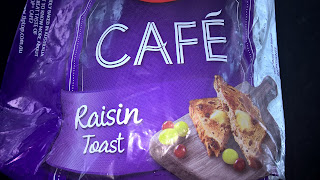 It's all part of the routine: get up, have tea, down poison, get dressed, play with Dog in the park, go for coffee in the village. With Stevie away the routine continues, except earlier and without his ordering finesse.

Today I fancied breakfast, but I couldn't remember the words - Raisin Toast. So I ordered coffee and then had to mime and play guess the word with Laurence. Luckily she was happy to play.

Me: I want some ahhh, stuff, like, flat, with some sultanas.
Her: Raisin Toast!

There it was a fist pump moment as the order was made. Whew!

What a drag it is being temporarily unable to move a word from your brain to your mouth. If I was teaching, the kids would very soon think I was some sort of lunatic stupid fool. Yeh, see I miss Stevie cos he doesn't judge, he just waits for the words to find their new odd way from brain to tongue. It might be time to see about a new Sat Nav for my brain.

But I am not, at least I don't think I am, suffering from Alzheimers, cos whilst words sometimes go missing, my memory is still well honed.

So when some dick rang the bell this morning and told me he was here to do the tree lopping, I didn't hesitate for a minute. I KNEW I had never organised any such work.

Yeh I was surprised too that I didn't swear at him, but these sort of gypsy / pikey scams were pretty common in London and the arseholes were well known for doing all sorts of vandalism if their game was rudely rumbled so sometimes politeness is an advantage.

What worries me is I wonder how it would be if you were aware that you are sometimes a bit forgetful, and you think there is a chance that you did sign up for this work and you go out and let 'em in, cos you know it's possible, even though you don't recognise 'em at all, and then they smile and show you some dirty bit of an order form which shows an agreement for work for say $400. I reckon you'd be so consumed with trying to remember and feeling stupid that you wouldn't question it too much or look too closely at the order form and perhaps the only bright spot would be that you don't have the cash to hand, although these scammers would no doubt drive you to the ATM, before they buggered off after doing either no work or a shit job.

The Goldie is a city of scammers, but it doesn't have it all to itself, as I said door knocking shit happened all the time in London. But here on the Goldie we have an aging population. Oldies come to retire and put their feet up or stroll on the beaches and typically many minds ebb away with the tide.

This fella this morning probably has some percentage for success. Like maybe he needs to knock on 10 doors to land 1 sucker. Or maybe it's more?

But it wouldn't do anyone any harm to keep an eye out for strangers lobbing in to elderly neighbours' places, just to make sure that as far as we can, we are keeping the bastards honest. It doesn't need to be a full time occupation, but a bit of awareness never hurt.

And if you are having a conversation with an other ordinary looking soul and they go in search of a word, a bit of patience will be appreciated. Now I've got to get back to the .... um .... black...legs...sweet girl.......Ah DOG.
Posted by Unknown at 11:40