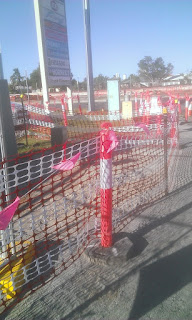 This is our street corner after 21 'GOS' 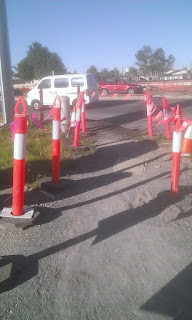 The Footpath here is not as smooth as this photos implies. 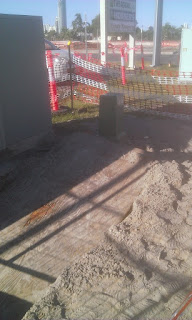 They are now chucking random bits of ply wood over the holes.


This is the year of the Battle with the Bastards, and after yesterday's post about Rocky 4, I rather like the idea of being able to give these areswipes' noses a bit of a tickle.

I thought things had calmed down and rather hopefully or naively or stupidly, guessed that we might have even had a little win, but NO, TMR has started up again! Friday night at 11.45 PM - yeh that's right, at a quarter to the witching hour they parked up their fucking Vacumm Excavation truck and dug another hole in the footpath. Of course they could have done this work during the DAY and of course they could have used a person with a shovel, but why let some consideration for the health and well being of the locals get in the way of being total fucking bastards?

This followed on from, or might have been because of - depending on the degree of paranoia you permit, an email I sent last week asking what trouble or problem they were having. In an idle moment I sat and counted back in my diarised notes and found that these fuckwits have dug up the corner of my street 21 - yep TWENTY-ONE times, and still they have not finished. And 21 times is a conservative count cos I am sure I have missed recording some of the attempts when I was just too tired to lift a pen, and I was away for a while too.

So they dig it up, have a look and a little shoulder shrug, and fill it up again. By the looks of the mess they have left this time, they are not bothering too much with the filling up and if this is their effort at 'making good' the footpath, I await news of a law suit filed by an old person less fleet of foot, who has gone for a tumble. 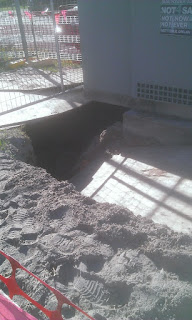 The District Director of TMR has been replaced by another job's worth who is now Acting District Director, and the cynic in me wonders if this is just more of a ploy to hinder any honest forthright dialogue with this appalling government department. He sent back a shitful stupid response but finished off saying that this work is going to go on until late 2017. Hmmm. It was meant to be September and then that stretched to October, but that is clearly no longer the end date. Just more shit for longer! Yeh I know all government departments are all the same, but I only really have experience with this lot, unless you count the police department, which it seems is run by TMR anyway.

So the new fella sprouted the same old shit the other fella started with 5 months ago.

The merry-go-round is making me nauseous, nauseous but not surprised. Ho Hum

The Bulletin Newspaper has been following up and is now looking into the methods and the obscene waste of tax payer money, and I think they might also be having a little look see at what role the police play in this very sleazy wee dance. I am still waiting to hear if the police are going to continue to pursue the infringement notice they issued me on the first of March, for 'Walking too slowly across the road'. I guess it will depend on just how much TMR wants the $48 fine. I do wonder how long it takes to make a decision about this - perhaps as long as it takes TMR to relocate a few services in a suburban street?

Stevie is getting nervous cos if they are starting up again I might head out and get myself arrested while he is away. He hopes that if I go out there I will take Dog cos the coppers might be less keen to chuck a dog in the paddy wagon. I wonder what the procedure will be if no-one is available to take delivery of me.

I must remember to tuck a credit card up my whatsit just in case huh?