Notification to Threat in a single bound. 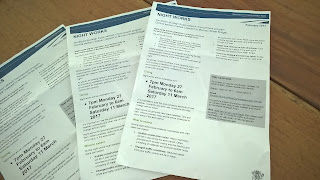 
My Darling Grandie Boy was thoroughly bemused this week as I told him a story about how a boy serenaded me at my house when I was only 12. He could have been laughing at the idea that his fat old greying wrinkled grandma was ever young enough or cute enough to attract such attention, or he might have been laughing at the whole idea of serenading - how embarrassment! or perhaps it was the image of a man his Mum remembers so fondly, just walking on out and then closing the door on the young man, I mean How RUDE! Yeh my darling Dad took no prisoners. Oh Well.

In any case laugh he did. And I have since spent time thinking that's as close to a stalker as I have blessedly ever come. Stories of women forced into hiding from their exs have filled the news this week, so I am definitely NOT lamenting the lack of attention, and I fear for these women when I hear their stories. It is high time the justice system worked in favour of the victims not the violent dangerous turds.

I got notices in the postbox yesterday and I was given to wondering about when good intentions turn sour and when lines are crossed, and if I can be wondering that then surely to shit the legal system in this country can too.

Yeh it's a shit segue but my mind is a bit all over the place, and I am definitely not comparing my lack of sleep due to noisy roadworks to the violence endured by so many women. This is just the flinging around of my mind caused by the fucking notices.

If you get a detailed text message inviting you to a party which doesn't sound like fun to you, from a person you don't like, then you can ignore it or politely send back a refusal, cos, 'you have to wash your hair or take your cat to the vet, or scrub the kitchen floor with a toothbrush'. Done and dealt with!

But then you get the exact same invitation. Now that's a little odd, but maybe the person hit re-send by mistake or they had forgotten that they had already sent the first one. Surely they haven't got the shits up because you didn't immediately go Yippee!

And then the exact same invitation is sent AGAIN.

Did the sender think that the third time would be the charm?

Did they send it 3 times by mistake?

Did they put some whacko in charge of the invitations?

Are things getting nasty and should you lock the front door?

The Department Of Transport and Main Roads sent THREE notices of the impending doom - next week's NIGHTWORKS.

Two would have been more than enough. Two could possibly have been a mistake made by 2 people delivering the notices and double dipping into our letterbox. Or it could have been designed to up the ante from warning to threat.

Three notices however - well that can only be inflammatory.

That's a, 'Ha fucking ha ha to you, we are gonna be getting our penalty night rates and you can just go suck the big one.'

I am not sure where their hatred and hostility comes from. They have their noses in the public purse trough and are getting excellent cash to do little more than fuck all and they know full well that the noise they are making is excessive, unreasonable and illegal, but still they think they can take the moral high ground and hate ME. Perhaps there is an intelligence test which must be failed before being rewarded with a job on this site, certainly their emotional intelligence is piss poor.

So now I can spend the weekend anticipating more shit next week. More noise - 24 hours a day. More rudeness and being ignored. More silence in lieu of requested information. More feeling nauseous and unwell. More hostility and hatred spewing forth from workers on the ponce. More visits by our local coppers. More of a whole lot of shit and nothing pleasant.

Spite can be the only reason why these notices dropped on Friday. Bastards!

Yeh there might be another explanation, but I doubt it. A gormless joyful little jig no doubt accompanied the notice.

Once more into the fray.

And if you think the woman next door needs your help please call the police and then give her a hand. So much better to be safe than sorry.