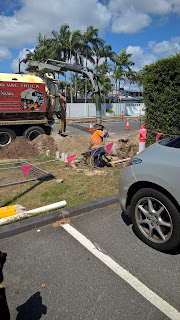 The SUCKY SUCKY MACHINE - reckon it would put a vacuum cleaner to shame.


Last night we were catching up on 'I'm a Celebrity' jungle shit cos that's just how sad we are. I admit that we don't watch the whole lot. I take charge of the remote and whip through all the ads and the bits with the hosts and the 'coming up' and recapping shit so you can watch 90 minutes worth in about 15 minutes, but you have to be quick on the finger. Last night's disgusting, watch it from behind my hand, bit, was blindfolded feeding of truly awful shit. I heard them do OK, except for the first little throw up.

And I wondered if I could ever do that? Well the wondering took but milliseconds cos of course I couldn't. I like a bit of control, ok, a lot of control, and being blindfolded and force fed shit, even it is was full of fat and sugar, just isn't on my list of things to aspire to.

And then I wondered about those poor sods whose job it is to test for poisoning before someone famous or important or just idly rich and a bit insane, chows into a meal.

How must they feel every time they sit with spoon in hand and chomp up mouthful of potential industrial waste or chemical weaponry? I wonder if they have faith that the kitchen people are not in cahoots with possible assassins and so happily hoover up the calories all the while pocketing the danger money.

I wonder if the job of FOOD TESTER has ever been ratified by the 'Elf and Safety Police.

And then I wondered yet again about the OH&S people.

My experience with these people runs a bit like this. I was standing on a chair taking down some lights that had been draped across an original artwork, and the OH&S wanker sighted me and sited me and I got into all sorts of trouble. I had to attend OH&S  workshops as my punishment and of course I lasted there about a minute and a half. It was all just so much dross.

However I have it on good authority that occasionally some good can come from them.

Sometimes they actually force work places to adopt safe practices which are definitely designed to benefit the workers. I am not sure what sort of measures an OH&S person would impose on the food testers, perhaps they would just insist on a comfy chair and funeral insurance.

Stevie took on the role of OH&S today. He was thrilled to be elevated to such a lofty position.

The fuckers at the end of the road for the 5th time this week have been digging up the footpath, and even though I spied a shovel, they were of course using the Vacuum Excavation Machine tossing out 85-110 decibels.

There are no Ear Defenders in sight.

And now because I am not OH&S qualified I am gonna tell you some stuff from memory which might well be tainted by exposure to this shitting noise all fucking week.

2 minutes exposure to 110 BD has been associated with hearing loss.

The fucking literature goes on and on about increased stress, fatigue, disturbance of sleep, decreased concentration, and decreased mental performance, and some confusing scary complicated shit about hair cell damage and cell death. (Oh Yukky, I wonder if I should suggest that the Jungle people be fed a soup of sloughed out dead hair cells.)

The fella operating the SUCKY SUCKY, goes hard at it for hours at a time. I am guessing he's already deaf.

The Lolly Pop fella stands right next to the SUCKY SUCKY for hours at a time.

Stevie felt sorry for him this morning and so sidled up to him with the machine in full swing, putting his own hearing and mental capacity at risk and yelled to the Lolly Pop, Stop, Go, SLOW bloke,  that the noise from the machine was causing permanent hearing loss and that he aught to be wearing EAR DEFENDERS. The bloke yelled back, 'I can't wear ear defenders cos I am on traffic control and need to be able to hear other stuff, why don't you just go away.'

Well that wasn't much of a thank you I must say!