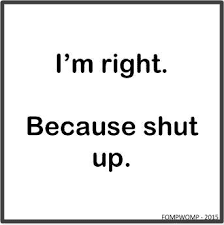 
It seems I have always been able to listen and pick holes in a bullshit statement. Of course this made me a gobby pain in the arse as a youngster. Passive resistance was not something I was any good at, so if I was told NO and I thought that was more than a little bit rubbish, I'd argue and pout and end with an affirmative action statement of what I was going to do. I didn't just smile and nod and then sneak around. I know lots of kids and adults too, use this method, but it was not for me.

Except for the knicker issue 1970.

But in 1970, bikini knickers were all the rage. She refused to consider 'em so on my 11th or 12th birthday, all my girlfriends gave me a pair and still the old girl said NO. So I'd wear the old grannies to school and get changed and then I'd change back and then wash the little whisps in the shower and dry 'em under my pillow. So I guess that was a bit passive aggressive but it wasn't what was normal , for me.

When she wouldn't let me wear what I wanted to wear I'd argue and debate and compromise, and it was this desire to be self directed that led me to work from the time I was 12. I did enjoy having my own cash so I could choose for myself.

And then there was the time she refused permission for me to get a fringe. Yeh I just grabbed the scissors and did it myself, my hair my choice, I figured. She did not grow to like it. Ho Hum. Eyebrows and leg hair went the same way.

It seemed I was pretty good at making an argument and this saw me in the debating team all the way through high school.

I was always Second Speaker, so I could have some of the speech written but there was plenty of room to go hard in the unplanned rebuttal. The fella who went First, liked to have his speech mostly sorted, and my friend who went Third was excellent at flying by the seat of her pants. I liked just a bit security with my adrenaline rush..

The thing about debating is that there are very clear and concise rules, covering timing and stuff like introducing new information, and then there were strategies that were helpful within the rules.

Our French teacher in years 11 and 12, Mr Whitmore, a Canadian import, was also our Debating coach. In the midst of reading Le Comte de Monte Cristo he'd call a time out and we'd plan the next debate strategy. How lucky was that ? The Senior School Debate team all in his little class. He was a wonderful fella with a mad mop of red curly hair and he taught us well, not just French and debating but life in general.

I went on to use his debate strategy when I was coaching teams later as a teacher, cos it made sense, it was reasoned and rational and more often than not it proved successful.

Unfortunately dealing with a Government department comes with no handbook. Bugger!

If ever a public servant gets over the belly laughed induced hernia resulting from laughing up a lung at some dumb punter stupid enough to try to wade through the  complaint process, and they take a few civic minded moments, they could pen a 'How To' for fools like me.

Anything that would help slog through the mire  would be a best seller.