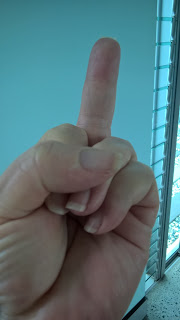 My Lovely Grandie Boy has started at High School.

He took off and refused to allow his Mum to walk him in - such is just how grown up he thinks he is, wishes he is, pretends he is.

I admit to having a silent little sob when I first saw him arriving home in his flash school uniform, and man sized proper shoes, lugging a back pack 5 times the size of my head, cos when he managed to shrug off said pack, I saw his shirt well and truly sweat stuck to his back. How hot that fabric must be? How unnecessary, but that's a conversation for another day.

Anyway he seemed to be fitting in well enough. He pretended to be calm and in control of everything but I reckon the fact that for the first time in his life his Mum now needs to wake him in a panic at 7.30 am speaks of how he might be sorting the stress of it all in his dreams. Sloping off up that big hill and rolling back down it, in this shitful heat, could also be what's leaving him pooped. Who's to really know.

Anyway last Tuesday, during a soccer game for sports, he managed to break the middle finger on his left hand, yep he's left handed.

Well that is just a big pisser!

First there were Xrays and then a hospital visit and a splint and another appointment at the specialist cos the break is somewhere near the growth plate and if he's not careful his finger won't grow properly and could be deformed when his MAN HANDS come in.

Well yeh, we all know that CAREFUL is not in a young fella's vocab.

He's got a custom made half plate thing that locks his last 3 fingers together. This is held in place by straps of velcro. He's meant to take the contraption off once a week to give his fingers a little bird bath.

Leave a kid in charge of stuff like that and I reckon you are asking for trouble.

He can't write - yeh not worried about that, on the contrary, it's all a bit of YIPPEE, but that's where the joy ends. No sport, no swimming, no Taekwondo and no eating up a 2 handed burger or even chopping into a sausage or easily use a knife and fork for any go at feeding himself.

And next week is school camp! I just can't see him asking someone to cut up his dinner for him. Shit he doesn't even want to ask his Mum in the privacy of his own house. So I can see him taking that thing off and leaving it off more than it's on.

The only thing that did in fact make him wonder was the idea that he might not be able to give anyone the finger if the break doesn't heal properly.

Yeh, he wasn't happy about the idea that he wouldn't be able to flip anyone the bird.

It's gratifying to think that the apple has not fallen far from the tree.

Big Middle Finger up to TMR and Georgiou Group
Posted by Unknown at 12:10