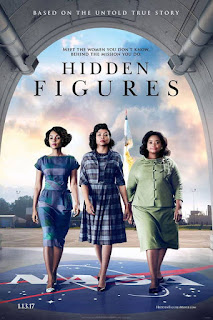 Yep it's awards season and that means that on any given day, if energy levels permit, I am off to have a little look see at what might win.

Today, I am very pleased to say that firstly I had enough 'cinebuzz' points for a freebie and that I used it for this wonderful movie.

I like to believe that it's a pretty accurate account of the early space programme in the USA.

Things of course were cracking along under the direction of white-shirted, black tied fellas at the forefront, all the while women, some black and some white, were making wonderful inroads into the design and technology of it all.

The story is about a trio of black women who rose to prominence against the odds, not because they were militant coloured gals or hairy arm-pitted feministos, although these philosophies did drive them. Nah, they made waves because they were just so bloody wonderfully smart, and because they knew their own self worth and were not prepared to settle for less. They waged their own individual quiet tussles in a dignified and mostly calm manner.

The little microcosm that was NASA in the early 60s just became a paragon of tolerance, not because the folk were waving banners and marching up the High Street, but because it was expedient to be so. Separate Black White loos and coffee pots and Men only bastions just stood in the way of getting the job done.

Rationality and reason were the order of the day. Blessed BE.

So yeh I liked it.

It is well acted and shot and I loved all the references to the 1960s - the fashion, the cars, the politics, the tellies and the furniture and interiors, and as with most movies based on true stories the credits roll includes photos of the real girls and a bit about what they got up to after the movie timeframe.

This is worth a nod for awards night.
Posted by Unknown at 17:11