What's Springing at Your Place? 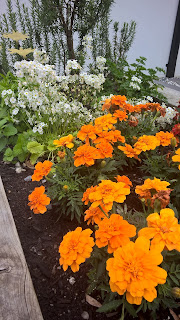 Let's face it there is not much in the way of seasonal changes here on the Goldie. To quote the wonderful late Robin Williams in 'Good Morning Vietnam', 'It's hot, damn hot.' nearly all of the time except for a couple of nights a year when  you might need a wee blankey. There is no gradual dip into a big freeze or a slide into the sweat. It comes on all of a sudden like a menopausal flush.

In London there was a burst of daffodils in the most unexpected places like on round abouts and in little clumps in footpath gardens and sometimes in the middle of a field, and as these all popped up, people would put away their winter coats and wipe the mould off their summer sandals and make a start on booking a summer break where they can bake 'em selves, or at least find a spot in a public park where they might take off most of their clothes and soak up some rays on the one or 2 days of summer.

The thing about having seasons is the change up in the way you do stuff.

Summer in London meant not much darkness. The days stretch out til maybe 9.30-10pm and I recall very fondly, garden sitting sipping champers and forgetting all about dinner or shitful TV. Of course it might have been a nightmare trying to get the kids into bed, but I guess that is what black-out curtains are for.

And winter afternoons saw me driving home at 4 ish on the rare times I left with the kids, and I'd need the headlights on and the heater cranked up. The days just vanished. I often arrived and left in darkness.

My credit cards got a workout in summer at the pubs by the river and in the winter they were useful for scraping the ice off my windscreen in the mornings.

So yeh I do love a bit of a season.

But today I pottered in the garden and whilst I might not have noticed a change, my plants certainly have. I planted some flowers next to the herbs, cos I couldn't be bother trying for more tomatoes and they have all taken off like topsy and the tarragon bush that I thought almost certainly I had killed when I pruned it - oh fuck it, I didn't prune it I chopped it off at ground level but was too lazy to pull the damn thing out, well it has come back like some maniac triffid, and all of a sudden I am a parsley farmer and if you want some rosemary, well I'm your gal.

I might not be going through the London ritual of washing all my woolens in the pommie equivalent of Martha Gardiners and polishing up my toe nails to be thong ready, but the garden is singing summer's praise.

The Grandie boy is coming next week and there is very little doubt that he will christen the pool for the season, so that is about the most obvious and noisy sign that summer is upon us.

Thankfully Stevie has seen to the chemical formula and all will be ready for the little fella, who I should add, has been growing rampantly like my bloody herbs. There is no doubt that he will be taller than all of us by this summer's end and god only knows what size his feet will be, given that he's sliding those lumps of meat into a size 9 already.