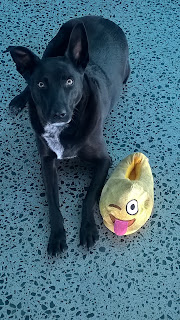 I have been so so lucky these holidays cos I have had the grandie boy all to myself. I was selfish, so there were no invitations to his mate from school, it was just him and me and we pleased ourselves and of course Dog.

So the dark wee hours of usual wakefulness, were filled with anything but quiet. There was no reading and no wondering about the world and no gently shoving Dog back onto her side of the bed.

Instead, the days started with a BANG. There was laughing and singing and giggling and growling to get Dog going. There was leaping onto and off the bed and the merciless teasing of Dog by hiding her chew toy - yeh I know it looks a lot like some novelty slipper, cos that's what it is, thanks to a mother's day parcel from 'the kids' but Dog saw it and declared it her's and then the other one found it's way downstairs, so there's this grubby one downstairs, and a less chewed up one for sucking on at bed time.

Yesterday was the last day of the holiday and so I suppose all rules flew out the window, and my bed became a dawn playground for Dog and Grandie and me. The sheets and doona were covered in dog hair and slobber and all the usual neat corners were messy and crinkley. I know Dog thinks she's a lap dog but the bed was definitely full up to pussy's bow by the time we were all bouncing around.

It was hectic to say the least. And bloody wonderful. And last night I was so pooped I feel asleep in the middle of something on the tellie, after I had already nodded off when I got home from delivering him back to his Mum's place.

So I guess it should be no real surprise that I was awake this morning in the dark, listening to the quiet.

Dog seemed to be missing her mate and had spent the night wandering around the house looking for him, having a good sniff in all the usual places and then tippity tapping her nails back down the hallway and into her bed. She came and went and came and went and she must have figured I had disposed of her playmate and had the shits up with me, cos she didn't even try to climb up onto the bed.

There really and truly is just nothing wonderful about being awake at silly o'clocks, especially when there is nothing pressing to be done.

I reached for my book.

I have been reading 'Not Quite Dating' by Catherine Bybee. It's possible that I bought this trash, but only if I had a moment of utter senile nanniness. It's the greatest load of rather poorly written, predictable bullshit. I finished it this morning and to say I was underwhelmed is monumental understatement. It has quite put me off starting anothery in case I had a day of questionable purchasing.

Stevie is clever. He orders a sample of a book before ordering, but I am too impatient for all that malarky. If it sounds sort of OK then I buy it. I guess that's the only problem I have with the Kindle. I am pretty sure that I would have tossed this crap aside like it was diseased, if I had picked it up in QBD, but instead it's now on my Kindle, so I can't even offer to lend it to someone I am not much fond of. Bugger!

The washer and the drier are humming along as I do the usual after entertaining house guests and apart from that it's very quiet.

Yep I am a lucky old Ma. Lucky that the Grandie boy seems to enjoy his visits and that he is such a good easy boy who brings me such joy, but lucky too cos now I can crawl up onto the couch for a little ZZZZnap, any old time I like without having to wonder about honey sangas and how to get in his 5 a day, and if he is being entertained.

Luck, that's what I am gonna contemplate when I am awake in the wee dark hours tomorrow.