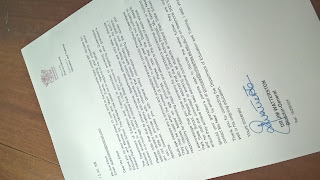 Close enough to a month ago, I wrote to my Grandie's school and the Minister for Education and finally today I received a letter back -  Not from the school you understand but from the Director General of Education and Training - the Minister presumably being too busy covering all the other portfolios she has, to bother answering me herself.

Dr Watterston - well clearly NOT the real Dr W - it would have been one of his minions or maybe a committee of junior clerks, made it clear that he could not discuss specifics about my Grandie's education, cos I am a nobody, and instead fed me the usual bullshit about composite classes - Multi -age classes for you modern folk. What is interesting is that he has made it very clear that kids are thrown into these classes because of student number shortages. Yeh it's just expedient, and he at least doesn't pretend that any fine educational outcomes are expected.

When he stated that the school staff are 'committed to working with all the students to ensure they achieve their best educational outcomes', I snorted so hard that I had a little vomit in my mouth.

The school  didn't even have the common decency or reasonable manners to tell me that they were not gonna address the issues cos I am a nobody, they just stuck their collective heads in the sand and figured I would go away, eventually.

So my Grandie's 'Best educational outcomes' came in the form of the very worst report card ever, for semester 1.

Seriously  it would not  take a detailed forensic analysis to notice that his results were very poor indeed and certainly not a indication of his NAPLAN proven ability.

Do you know what really gives me the shits? It's the pretence that all the kids are getting a quality education. It'd be different if the school just copped to the fact that these kids are getting a piss poor deal and that in a bid to smear the shit evenly, they spread the joy of the composite class around. There are 4 terms so there could have been 4 chorts into the crap class, or if that was too much trouble there are 2 semesters so there could have been at least 2 different lots, and then all the kids would have had at least 6 months of reasonable education. But NO, instead these 9 year 6 kids have a whole year of shit.

I very much doubt his teachers over the last few years would recognise him as the same boy they knew.

The school can not claim to be unaware of all this. I have called and written and his Mother has written.

Oh I know the answer is that you get what you pay for and as it's a State School, it comes free of charge, except that that, like the justification about the composite class, is just more bullshit. Send a bill for this and a bill for that, but let's not for a millisecond think that there is any obligation to provide a decent service.

If this place was a restaurant, it would be a stinking Hungry Jacks but actually not as good, cos at least at Hungry's you can make a complaint and something is done to rectify the problem. Here they don't give credence to the complaint and charge you double.