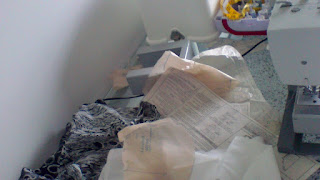 Nah this isn't a post about how quickly the month has flown by with Stevie off on his Boy's jolly, although it has, and it's not about wondering how my lovely girl has gone so quickly from child to woman, although I sure do, especially after watching Mama Mia AGAIN, cos I always cry when they get to bit about 'School Bag in hand' and she sits up on her Mum's lap and they do nails and stuff, what a silly way to spend the afternoon huh? That scene always creeps up on me, and then I am reaching for the tissues. What a dick!

Nope the time I am thinking about is the last 40 years and how it has flown by and how I wonder if I would even recognise THAT girl now.

40 Years ago if I fancied a new outfit, I'd root around in the fabric cupboard and whip something up, or I'd take a dress from my Nanna - well not literally 'take it' you understand, I wouldn't sneak into her cupboard while she was at Bowls and help myself,  she would have given it to me, and I'd make some alterations to it and voila! Or maybe if I was lucky my Lovely Dad would have been out at the shops when the mood grabbed him and he might have picked up some super trendy thing cos that's what he was like. Wanting something new to wear rarely involved trawling the shops.

When I was the child bride I would pop into designer shops and try stuff on and then if I liked it, I'd draw it and then run home and whip it up. For the younger generation, this was before mobile phones had been invented, so there were no quick selfies in the change rooms. The stuff often looked more try hard than designer but still, my clothes were not like everyone else's, and they were pretty cheap. Give me an afternoon and my Nanna's button box and I could be ready to go to the pub before it was dark.

Back in the day, off the rack clothes were really expensive. There was of course no internet and therefore no online shopping from American sites which no doubt use child labour to whip up items by the gazillion and can therefore sell them for a penny per kilo . There was no price matching promise from store to store and it wouldn't matter anyway cos the shops all had different stuff and so it was possible to spend days shopping for that perfect outfit.

And even if you just wanted something cheap and cheerful to slob around home in  or something functional to wear to work, it would cost an arm and a leg. There was no Kmart or Best and Less, or maybe there was but they were just poor quality for too much cash, and so for the money you'd probably have been better going to Sussans or Myers.

But, fabric was at giveaway prices and there were bargain bins and off cuts in all the major department stores as well as in the speciality haberdasheries. I had quite the collection of bits and pieces. There was an old fashioned haberdashery store, 'up the terminus' - where the trams used to stop at Camp Hill and I would walk up there from my Nanna's place. This place was like Willy Wonka's factory for anyone who sewed stuff. I spent hours in there looking at all the lace and the buttons and the fabrics and weird stuff that I couldn't even identify. I loved this shop. As I sit here I can still smell it and could draw the layout and can see the ladies in my mind's eye. It was a very sad day when it closed down.

And so in what seems like a blink we have gone from make your own stuff with fabrics and fixings cheap as chips, because the store bought clothes were just for special, to a time when making your own shit just seems like an enormous waste of time and money.

I have spent more than 2 weeks trying to whip up a dress. I have not finished it yet and whilst I am not prepared to admit defeat, I have lost my fervour for it. It's not for want of 'How to' - I know what I am doing, but I perhaps should have started with something less ambitious. There is detail that I am not happy with that will need to be disguised under a great big fucking button, and I don't want to tally the costs involved cos I might cry, cos for less cash I have ordered in 3 dresses from the States - delivery expected any day now.

So I can see why sewing is a dying art. It just doesn't pay to bother, unless you can get lucky, like when we first moved into the big house and we needed some curtains and we'd been at an auction and bought a bolt of fabric for fuck all. Then being able to whip up some temporary curtains so the neighbours didn't go blind was very useful, but I suppose in truth, a gal and a roll of tape could have produced a similar covering, so even in this, sewing might be overrated.

And I am reminded of the Grandie's foray into pastry making during the hols. Those wee pies he whipped up, were twice the price of similar ones from a designer bakery and we had to make 'em. Bloody hell.

See this is what has happened in the last 3 or 4 decades. Domestic skills have just gone by the board - no longer useful, or financially viable.

Fucking brilliant really, cos I hate all that domestic shit - it's only a shame that ALL the domestic tasks have not evapourated into the ether, just the ones I used to get a kick out of. Ho Hum