Government Departments - I do despair 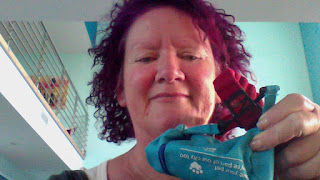 3 times this week I have had an interaction with a public servant, and I am about up to a point where I would happily chew my arm off to escape every having to do so again.

Except the middle encounter. We took Dog off to the Botanical gardens today and she ran like a maniac and come home slowly slowly dragging her hips like they are bags of unwashed laundry. There is a great space at the back of the park where dogs can run free and even though there are tales of nasty dogs from time to time, I have always found it a happy friendly place.

As we were getting close to the car, there are signs to put dogs back on the lead and sometimes we do and sometimes we don't. Today we did, which was just as well cos as we looked up to the car, we spied the Dog Catcher and his van. He didn't look like that nasty fucker out of Chitty Chitty Bang Bang, but as looks can be deceptive, I was pleased to not have given him any reason to cause us angst. He walked passed us a couple of times, back and forth, back and forth, and I was pretty sure he was looking for something, but in the end, he stopped me while Stevie was watering Dog and asked if I would like a little zip bag for the poo baggies we had tied onto her lead. I asked him how much I would owe him, he laughed and said it was a freebie, and I said yes thank you very much. It is just the ticket! I can't remember the last time I got anything for nothing from the government. Bloody Bonus!

But that's where the good luck starts and finishes.

The Driver's Licence place was all but empty and I was first inline. Yippee!

I had already filled in all the paper work so all I should have had to do was sit down, not smile, and part with cash. Pretty simple huh, especially as I have had no tickets and am not wanted in several states for crimes against the English language. BUT NO. Not simple.

I had written that my natural hair colour was fair. This troubled her as FAIR wasn't an option. So I told her BLONDE.

So she then takes the photo and for 165 buck you don't even get to have a look see, and whilst I don't reckon I am all that vain, I would rather like NOT to look a hungry yeti stalking my dinner.

Then she takes the money with no comment that there will be a surcharge for the use of a credit card. Ho fucking hum, I just wanted to run screaming from the building.

And then I suppose flying in the face of Identity thievery and shit that goes missing in the mail, there is an insistence that the new Licence is posted to your home address, via the shitfully inefficient postal service during which process there is a very real chance that some fucker will steal it and open up all manner of fake accounts and stuff the likes of which I cannot even imagine, and I could well end up in jail. I fucking hate government bullshit.

And just now, I opened my emails and received 2 emails from my Grandie's school. I thought that finally after all this time, manners might have won out, and that someone might have seen fit to respond to the letter I sent the Head Teacher back in May. Yeh that'd be the letter that apparently it was OK for him to ignore cos I am a nobody, a nothing, a non-existent zippo, who deserved neither, manners or a response. But I was WRONG again, or still or whatever.

Cos what it was, was 2 invoices!

So they can't have basic manners in the form of even a rudimentary reply, but they can keep my email address on file so they can send a nobody, nothing, non-existent zippo, a bloody bill, and not just one but 2.

Did I mention that I fucking hate government departments!