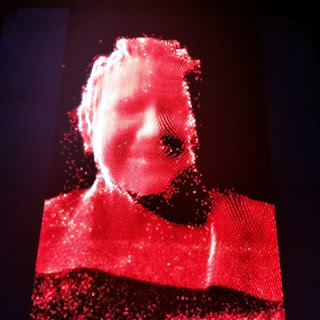 This may seem like a strange image, but all will become clear. Well maybe.


I have stuck my hand up and admitted to being a TV tragic before. And I might have let slip in passing that my guilty secret of late has been watching recorded episodes of Sophie Monk in the Bachelorette. Well as soon as Stu stepped off that helicopter as intruder number 3 or 4 or whatever, I was pretty sure he was gonna be 'the one'.

The thing is though, I didn't really care. I wasn't invested in the reality or otherwise of it all but I did spend some time questioning the motives of all of the players. In any case choose Sophie did and Stu was her pick.

I have seen only one interview with them both since the big announcement and seriously I just found it all more than a little cringe worthy. I mean people just spat out questions about wealth and sex and stuff that wouldn't be asked of even close friends and even thought I know they put their hands up for all this scrutiny, for reasons that just seriously boggle my mind, I still reckon they must be entitled to at least a modicum of 'That's not your business'.

And so today, not 2 days after their big announcement, some body language expert has supposedly had a look see at some photos and has declared the romance dead and buried.

No I didn't read the article and so didn't see the photos. But I will say that some days in hazy flattering light with a smeary lens, I can look like someone I recognise from younger years and other days, seriously the photos look like someone who by all rights should be long long in the ground. The point is, photos lie. People lie. Reality TV is full of lies and gossipy shit on social media or in shit rag publications are just full of lies.

Whether Sophie and Stu have been holed up in hotel rooms breaking headboards and chewing up room service sangas or whether they have not seen each other since or if they have seen each other but only over a bit of arvo-tea with some Earl Grey and a scone, well I just don't give a shit.

It was on the tellie and now it's done.

Now I have turned my attention to a certain auction. Again I don't care WHO wins, I am curious about just how many people can be crammed into a room or be kept on hold who have 3 million dollars to spend on a house where the neighbours' conversations will be audible enough to make 'em part of your extended family. 15 million for 5 extremely cosy houses. That seems unlikely to me, but then it is REALITY TELLIE.