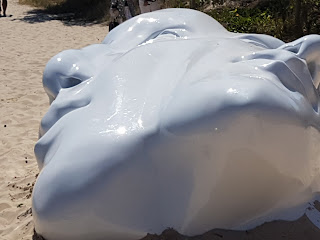 It's no secret that I go up to Brisvegas very week. The kids and I share a meal and more often than not a sing-along and a bit of a dance and oftentimes a tickle fest and roars of laughter and many cuddles,  and then we head off to WAAA ( better known as Taekwondo) where my girl and I revel in just how bloody marvellous the little big fella is becoming.

But this week it's Halloween and that's a big deal at their place but not at mine, so I suggested that I come up a different night and their little faces fell. Sadness wafted around 'em, and I thought all those bloody spirits I don't believe in were coming to whisk me away to the bah-humbug, anti-Halloween land.

When my girl was wee, there was no Ghost night. It just wasn't a 'thing'. And it simply boggles my mind that in 30 years Halloween has not just been taken up by the crazy witchy witchies from Macbeth, but by all and sundry. It is quite the community event in their area. Families dress up and trawl the streets in search of the best wrapped lollies and there is the odd garden decorated for oooohs and ahhhs.

This year the kids have decided to decorate and try to scare the shit of people. SO they have costumes and it is all quite the bit of urban theatre, what with Zig working out the best vantage point for his entrance and Bell working on becoming a moving-at-the-minute statue. Well bugger me if they didn't have a role planned for me. Oh sure there will be the obligatory cauldron of lollies and overseeing that has been my job in years gone by. Yep I am a qualified Trick or Treat decider. But this year the cauldron will be a booby trap, cos it's my job to sit on the balcony above it and launch water balloons at the kids who dare to put their hands out.

Yep, it's my job to wet people after Zig and Belly have done their best to make 'em pee their pants.

Never one to settle for ordinary, Zig suggested we put red food colouring in the water so it looked like blood. I am glad I decided to be a party to all the crazyness so I could at least say an emphatic NO to that. All these fine and dandy costumes and carefully applied makeup, being destroyed by the errant landing of water bombs is one thing, but being stained red, might not have left the parents well pleased.

So I have got my arsenal of water bombs ready to go and a few monster eyes for treaties and I will sit on the balcony dress in black and cackle like a witch as I lob the bombs. Yeh It's making me smile now that I have got my head around it.

And I am not expecting trouble cos let's face it, most of the costumes are home made and it'll be nearly 30 degrees so a bit of a shower will be a pleasant relief after all the up hill and down dale yomping.

I am taking my bubble machine and nothing can be bad if there are enough bubbles.