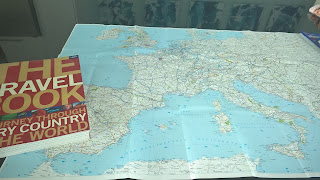 It's taken a while and it's a while til we head off, but we have got our tickets sorted and so at the end of May 2018 we will be jetting off for 6 weeks.

Many many bloody many calls and I have secured 2 return business tickets on points, on the days we wanted to go, with the connections which will see us just about running to make connections in Singapore. Yippee. No shit flights and no crappy connections in places no-one wants to go. Yippee indeed.

I have used points before. We went to Cairns one year and the flights and the car hire and the accommodation were all paid for on points. And I have gone shopping for shit that no-one really wants, but this is the first time I have used 'em all up in one foul hit, so please excuse me for feeling a little, well OK more than a little, nervous about it all.

Booking stuff on points is not for the feint hearted. You have to be considerably more than a little bloody minded and my advice would be to use the phone not the internet, cos the calls are recorded so what one person has promised has to be honoured, unless they have said you can have the plane when you are finished flying and that your pudding will be your body weight in chocolate mouse. But days of travel and confirmations versus waitlisted are honoured or at least that's my experience with SINGAPORE AIRLINES. Sure it has been a month of toing and froing but we are sorted. They are good people. They ring back when they say they are going to and they listen to call recordings to establish what has and hasn't be promised and then they issue the tickets, all confirmed.

So now the exciting part of the planning happens.

We will of course spend a week of so in London so Stevie can drink up with his mates, and we'll be there for the last week too, doing a deja vu, but the middle 4 weeks we are gonna do a train trip to wherever we fancy. AHHH!

I do love a train ride, and some of the journeys we are looking at sound bloody fantastic. One through the Alps, in some old train following slowly behind a goat herder - I might have made that bit up, clinging to the edge of the earth, makes Stevie almost shit his pants just thinking about it, but I reckon it sounds too good to miss, so it's on our list even if he has to spend the day wearing an eye mask and listening to Enya.

We are not drivers. Oh sure we drive. I know the M1 to Brisvegas ridiculously well, but driving is a means to an end. It brings no joy whatsoever, and whoever is driving gets to see bitumen and that's about all, so the train allows both of us to have a good look about even if Stevie will have to occasionally close his eyes.

Coincidentally most of the towns that are on our lists are 4 and a half hours apart - not the Alps train, - that's more like 10 hours. Stevie reckons that's a long time to be clinching his sphincter so we may break it up and stay overnight in a mountain village. Very nice too.

We haven't got a firm plan yet and maybe we wont have one even when we board the Eurostar and head for Germany, cos with smart phones and 4 and a half hours, planning will be possible on the run, well on our bums anyway. So we plan to start in Hamburg or maybe Hannover and end up in Rome and whatever else we see will be a big old bonus.

We lost a train once going from Budapest to Zagreb. It's a bit of a long story but anything other than loosing a whole train and our bags will be a bonus. The beers with the gun totting soldiers at the arse end of buggery in Eastern Europe and later the cackle of the farmers, remarkably assembled with our bags, all standing by the tracks in the middle of nowhere, where the train, full of chickens and truly wash deprived locals made an unscheduled stop, so the farmer strangers could return privileged stuff to strangers, remains an image in my mind, much more vivid than anything I have ever seen or posted on social media.

Yep that's the sort of adventure possible on a train.