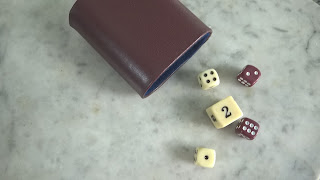 My lovely Dad would bet on just about anything. I have very strong memories of Saturday afternoons pussy footing about cos he had his ear stuck to the old hand held radio cheering on his horses, and of course his mood soared with wins and I suppose plummeted with the inevitable losses but I don't recall seeing that. His wins were legendary.

One afternoon he came home and for full disclosure I should mention that he'd had a few, but as a salve to the old woman, he gave her literally fists full of cash. This was back in the day when folding money in Oz was actually made of paper. Anyway they had a row, possibly about the state he was in and she got the shits up and tore every bill into tiny pieces. I'd have been impressed with her ire if in the next heart beat she was not set up on the dining table with a mountain of money bits and some sticky tape. She worked for hours doing that money jigsaw, and then she'd have pocketed the thousands. He didn't care about the money he cared about the winning.

Well except that the walk up flat that was our Goldie Getaway, which is now being replaced by 3 sky high towers at Broadbeach, was paid for with betting winnings. He seemed to be pretty lucky pretty often.

And as gambling became more run-of-the-mill, his smile widened. He'd buy lotto and keno and 'scratchies' and would be party to footy pools and The Dogs as well as his beloved horses. The horses were always his favourite, not 'The Melbourne Cup' though cos that was 'just for mugs'.

He started working as a bookies helper when he was a boy - always excellent with numbers, and then there was the trooping up to the TAB to place his bets and then with technology came his TAB phone betting account, and if he was alive today, no doubt he'd have every fucking betting App on his smart phone.

And so we get to my point.

Have you seen the ad on the tellie for NED? It's some betting App. I don't know how it works and don't care to know, especially as the ad shows a bunch of low-life scumbags lying and lazying about  a building site while the poor bastard paying them wanders around trying to work out why they are all idle except for their fingers on their phones. The turds play a game of 'There's a hole in my bucket dear Liza dear Liza,' blaming someone else for their lack of a start.

The ad just gives me the screaming irrits.

Under what sort of moral umbrella is it OK to scunge off the boss and lie to them and then gamble away the money you have just pilfered from them? At least we are saved from the usual bullshit slogan 'Gamble Responsibly' at the end of the ad, or maybe it is there but I am just too red in the face shouting at the tellie to hear it.

After a week of watching fuck all progress on the road, all I can think is that TMR workers all have this App and they spend their days taking the piss out of the tax payers who are ponying up their wages.
Posted by Unknown at 11:22