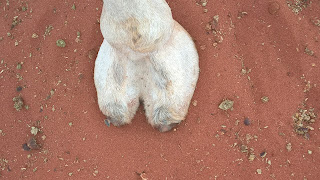 Now I reckon that if I could be a witch for a day, I might cackle as I fly around on my broom stick, furiously stabbing the air full of holes with my bent crooked pointy finger, shouting out Shakespearean curses and casting spells of 'Warty warty wart wart on you and you and you.' And if there was justice in the world, which I am fast coming to believe there is definitely NOT, then the worse your crimes, the bigger the warts and for all those turds at TMR and QPS, well the warts would be embedded into their private bits and pieces, and then could only be treated with scalpel blades and liquid nitrogen gas burning big holes and making festering blistery messes. And if that happened, well let's just say I would not be disappointed.

I have a wee wart on my foot which I have been trying to ignore for a while now, but as I had made an appointment to see the good Dr Jane while I was under the spell of the vertigo weasel and because it was for a few days hence and the vertigo had since left the building, and I didn't want to waste a visit, I stuck my foot up for inspection and she cracked on with smoting that fucker.

But getting rid of a wart is not as easy as orchestrating a meeting with a Queensland Minister during the 'Governing in the Regions' circus planned for next week, - which I must say was truly fucking hard work. I can only imagine that these ministers are truly just a gutless bunch cos whilst others were hearing of their success in winning a time, my requests were ignored. Yep I had to be completely bloody minded and more than a little sneaky, but finally I have secured a time slot for 10.30 am Tuesday, not to see the ACTUAL Minister of course cos he has been banished cos of corruption - yep his warts just got bigger, nah I have an appointment to see the Director General of TMR, the same bloke who was run out of the UK for all manner of suspect shit. Yeh I re4ckon his warts might be big too.

Similarly Dr Jane had to sneak up on the wart. Her first attack was slowly slowly catchy monkey and I thought, 'Oh that was Ok, so I can front up every week for 6 to 8 weeks for more of that'. But the second time she went at it, there was no sneaking up, it was the attack of the blade and the firing of the gas and I did a bit of birthing breathing and there was blood and my eyes might have leaked a little, and now 2 days later, it's still a little sore. Bugger.

Yep I am hoping that Tuesday's meeting will require some heavy breathing on their part. I say THEIR because even though I have asked to see but one person, already there is a posse of at least 3. We will just have to wait and see and in the mean time I hope my wart falls off sooner rather than later. I could leave it with 'em as a little token of my esteem.
Posted by Unknown at 16:35