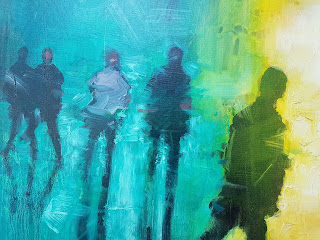 What's going on is not always clear.


When I was a girl, we lived about 8 or so houses from a train level crossing. The old brown cattle rattle trains connecting Wynnum to Brisvegas rumbled along, not as often as we'd all have liked, but often enough, and their arrival in both directions, coming and going, was announced by the less than melodic ding ding ding of the boom gates closing. It was LOUD.

However there was no point whinging about it cos the oldies had chosen to buy that house, so it was a matter of 'suck it up princess and get used to it' cos CHOICES had been made. And the noise was predictable and regular and eventually I heard the clang of the train arriving at 6am - no alarm clock needed and that was about all.

And when I first moved to London, I chose to live in a wee 2 up 2 down, house right under the flight path into Heathrow Airport. Now I haven't googled it but I believe that it is the busiest airport in the world, with planes landing and taking off every minute. And when I say 'right under the flight path', I mean I could have completed a survey on the tyre wear on the landing gear, on every plane. It was LOUD.

I turned the tellie up louder and got on with things, cos I had chosen to live there.

And anyway, you can get used to routine regular predictable noise.

I enjoy the vibrancy and the constant hum of urban life. I am city girl, but the sudden piercing of sirens always shocks me to wakefulness. I reckon it's impossible to get used to sudden noise at night.

All this is an intro to my having been accused this week of Harassment. Firstly by the body guard with a gun dressed as a police officer, and secondly by some stranger hiding behind his computer screen, or maybe his smart phone, I don't know his circumstances and don't care to know. What I do know is that he has some connection to TMR or the road workers or the police and has been provided my details by TMR or the police. Yeh that doesn't sound legal or right to me either, ho hum, oh well.

Harassment is against the law, so I suppose I should close up the house and pull down the blinds and ignore the gate bell or the phone for fear it's the folk in blue coming to throw me into the back of the paddy wagon. I wonder if they have finally sorted a little step so next time I can alight in a more lady like fashion?

24 hours a day, all week, terrible noise has seen very little sleep going on in this place, or indeed anywhere in the local neighbourhood. People are weepy tired.

I went out at 3 am on Thursday night or is that Friday morning, oh who knows? and there was a bloke dragging a thick hose across the pedestrian walk way right in front of me, so I stopped cos he didn't and when it seemed safe enough to walk on I did and said to him that it wasn't all that health and safety. I think he grunted. And while I walked because sleep was impossible, even though that's precisely exactly what I wanted to be doing, I came across a bloke in charge of 2 big bits of mechanical equipment tossing out more than 80 decibels, yeh I measured it. They were standing idle except for the noise. I asked if it was possible for him to turn them off while not in use please. 'NO'

Apparently this constitutes HARASSMENT these days.

So suggesting that a neighbour turns the noise down at 3am is HARASSMENT? Not the noise you understand, that's OK, it's your request that it be turned off, that's the harassment.

It's a world gone mad.

I have had kids throw furniture at me, and swear at me and parents call me at home, and I have been punched by frustrated teenage boys and called all manner of names. I guess all that is HARASSMENT too.

Bugger,  what I should have done during my 30 years in the classroom was claim HARASSMENT and then I could have had a copper park up in my room with their lights strobing away even if it might cause Johnny to suffer an epileptic seizure. Cos surely a middle aged woman of very dubious fitness, faced daily, with 200 hormone riddled, sometimes feral kids, surely she needs protection. Surely she needs a body guard with a gun. Surely her need of protection is greater than a gaggle of road workers, who blessedly have masses of metal machines between them and a group of tired middle aged folk in their PJs.

If I had to put money on the greatest threat, my cash would be on the kids every day of the week and twice on Sundays.

1500 bucks a night straight out of the public purse presumably because some worker has felt afraid for their life. I reckon they need to face a group of 30 year 9 boys, wanting to play footy, but instead are forced to read a bit of Shakespeare,  to get a handle on what real fear might be like, or maybe just a one on one with a kid coming down from a weekend of  drug cocktails and disappointment. Yeh good luck with that.

Perhaps the workers recognise that the noise they are making is extreme and perhaps they are wondering how long it would take for THEM to explode through lack of sleep and inability to function at work or just ordinary living.

Perhaps the workers reckon after more than a year they would crack and so they are afraid cos they figure if they are capable of seeking vigilantly justice, so too might this dangerous posse of middle aged, sleep deprived, PJ wearing, empty handed locals.

Harassment is bandied around a lot today, what one person considers harassment another might just disregard, it's all in the eye of the beholder.

The definition is benign at best - 'Unwelcome behaviour that offends, humiliates or intimidates'

So then anything that pisses you off is harassment!

The provider of that trolley with the wonky wheel at Woolies - Harasser!

The dog who sloppy-shat in a big pile that I stood in  - Harasser!

The year 9 boy who has not discovered the joy of deodorant - Harasser!

The body guard with a gun, following me too closely and threatening me, HARASSER!

I feel harassed by the noise and the disregard. I feel offending by the workers giving me The Bird and stalking me on line, threatening me with burst pipes and oozing sewerage.

Local people here have been afraid to have a voice. They privately admit to being totally intimidated by the workers, and feel exposed and afraid. There is enough bad shit going down and they fear further retaliation if they make their presence felt,and they see only humiliation coming from ignored complaints or requests for truthful information, delivered by those us who are less afraid.

So instead of hoping that a body guard with a gun will sufficiently intimidate local people into silence, or calling police on speed dial to throw unarmed, (not even a handbag!) middle aged women into the back of a paddy wagon in a bid to make them compliant, it is surely time that this government had a good hard look at exactly how it is spending our tax dollars, and questions WHO is being HARASSED and by whom.

Nah I can't see a time when there is ever gonna be an open transparent look at the way TMR is chewing up our cash.

Neither the neighbourhood street of my youth, or my airport hangout in London were strewn with local people waving their arms around and complaining about the noise, because they CHOSE to be there. Unlike the hapless, powerless locals here, who chose a bit of peace and quiet in the suburbs They are now bleary eyed and their teeth are bile stained from frustration because no-one in authority will step up and enforce Government approved EPA noise levels.

And don't even get us started on the ugliness of the monstrosity of a 56 metre wide expanse of bitumen and concrete, that's wide enough for 19 lanes of traffic! There will need to be water stations either side for pedestrians come the summer.

But that's a whole other story.