Accordion cramming - How much do you do? 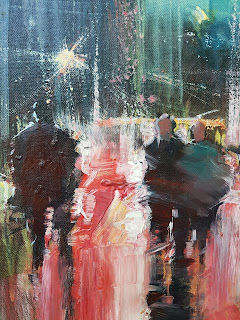 This looks pretty hectic to me, but in any case, I am just trying to use some photos of bits of paintings I have around the house, to brighten up my page.


Not even 20 years ago interstate travel was an adventure. There was the planning and the looking in the NEWSPAPER - the what? to find some accommodation or preferably there might have  been some friend or distant relative who knew someone who's best friend's aunty had a couch going begging, and so, Yippee! The plane fares were astronomical and the packing took days.

It wasn't the sort of thing one did on a whim, although once, only once, when the husband was going to Melbourne for work, which he did a lot, I downed tools from my supply teaching gig and packed up the wee girl and all of our shit and in a minute's notice I loaded us onto the plane and met him in Melbourne town. That was avant garde and brave and exciting and I recall that week with great fondness, even today, more than 30 years later, Yeh I also remember her taking a big shit in one of the parks and using a leaf to wipe her bum, and jumping out of a tram at its terminus at somewhere which I suppose was less than salubrious cos the driver and the conductor went into coniptions yelling for us to come back to the tram, and in the end they held up their departure for long enough for me to have a bit of a look around. They didn't want to leave us out there, where ever THERE was. And I remember her crying from blocked ear tubes and throwing up from the turbulence on the way back, but ho hum, we'd been on an adventure. We had no idea what was there and no internet to give us a LONELY PLANET schedule for the week. I just popped her into her umbrella stroller and grabbed a bag and a tram ticket and we looked and laughed our way all around Melbourne in the bloody cold of winter. I have loved Melbourne ever since.

But enough of all this reminiscence. What I have been thinking about today is the way we take travel for granted today.

There is a Leukaemia Foundation meeting in Melbourne in September and I am interested in going.

It's only for a day.

And it's all so easy now isn't it. Fares are cheap and accomm is expensive but easy to find.

It's just not something I would have given thought to 20 or 30 years ago.

We really do try to cram a lot into our lives don't we?