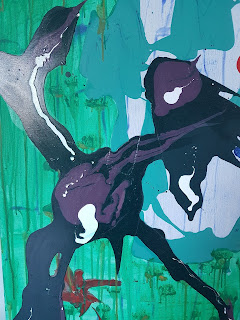 1. A state of disorder due to absence or non-recognition of authority.
2. Absence of government and absolute freedom of the individual, regarded as a political ideal.

It should shock no-one who visits here, that I am not much fond of authority, and I have long believed that the government should just butt out of just about everything. Until very recently I thought they should only be involved in protecting the country from external invasion and maybe funding the police to keep murder from becoming every day like coffee and high sugar content sweets. Now I am not so sure about the police, so perhaps just the military then? Yeh I haven't got a fully fledged manifesto, just some random ideas.

I walked along the beach at the Spit yesterday with Dog. It was just bloody lovely. She shat twice and twice I bent over double to collect it up like her good human, not because it's the law but because I am a decent human being,  and then we romped into the surf a bit more. The dogs were all friendly and the people greeted each other with loud, Howdies and all was very fine. I reckon just about everyone there had brought their fur babies with 'em, and whilst it wasn't crowded like it sometimes is in the Summer, it was a bit hectic. But there were no tell tale piles of dog shit. Maybe the rules forced people to collect the turds and maybe it was just because they too were decent human beings, although when I recall the fully loaded nappies - yeh 2 of the stinkers thrown willy nilly near the bins in the park on Saturday, I wonder about general decency - collecting Dog shit is a necessity, but smearing the world with kids shit, well, maybe they thought they were doing us all a favour by sharing their bundle of joy's leftovers.

No rules would mean that we dog folk could spread out, after all there is something like 50 kms of beach here at the Goldie - plenty of room for us all, and those fuckers with the nappies could continue to be pigs, goose and gander.

And then I guess if there are no rules about beach useage, I couldn't whinge about old saggy balled blokes and pert boobed gals getting their gear off, or yahoos playing rugby or babies or anyone at all - goose and gander.

Yep it would mean taking the good with the bad, so when getting rid of rules perhaps we all need to be careful what we wish for.

Mandatory voting? Yeh people should be interested in who and how the country runs, but if they are not, then forcing them to trundle through the cake stalls and snags to cast a donkey vote seems more than a little silly.

Government control over who can marry seems far from their 'Protect the country' remit. They should just butt out.

Blue and green should never be seen.....yep My darling Nanna would be appalled by the state of my house.

No white shoes after labour day - American I know, but fashion fascist anyone? I mean I don't have any white shoes, I barely have ANY shoes, I am a thong wearing woman, not an up the bum knicky noo wearer, a between the toes sandal gal, but if I had white shoes and I knew what Labour Day was about, I'd wear the damn shoes any time I liked, fuck the rules.

I have a little rule that Earl Grey Tea is only to be consumed between 3 and 4 pm. That's my wee regulation, just for me, although if we are ever at a cafe in the morning and you order a pot full of the stuff, expect a strange disapproving look cos I won't be able to help myself cos oooohhh YUK. But if I can shovel in all manner of hydrogenated fats and caffeine then I suppose you can please yourself with Earl Grey and a bowl of Acai - what the fuck is that anyway?

See eventually we'd get shit sorted. You could please yourself and so could I. Cos I reckon all those rules and regulations only keep us honest decent folk in line anyway.

Most of us do the right thing and the arsehats who don't, well they don't, with or without the laws.

We got a letter last week. It came with a Queensland Government stamp and looked all very official. I opened it without really looking especially given the bullshit going down here at the moment, and in doing so I broke the law.

Yep it was addressed to someone else. Ooops!

It was addressed to the son of the bloke we bought the house from, ALMOST A DECADE AGO. Yep he is using this address, even though he wasn't living here a decade ago, to register his cars and so when he parks up in the wrong place or I suppose if he gets caught on a speed camera then the shit comes here. I suppose similarly he uses this address on his licence and as applications for loans and so, when he defaults on the payments,  as is likely cos he doesn't think the rules apply to him, we can expect the repo blokes at the gate. I look forward to that!

He doesn't give a fuck about the rules or the laws.

And why should he? The government doesn't follow it's own rules and regulations, smart people with 2 passports forget about their nationality long enough to get 'emselves elected so they can chow down in the public money trough and public servants - misnomer I know, sign secret confidential contracts giving private permission to make as much noise and build in any manner at all regardless of impact or efficiency.

Is it any wonder that people like me are questioning the laws and have ceased to be intimidated by the law keepers?

Which laws give you the screaming irrits?