Today's been a good'un 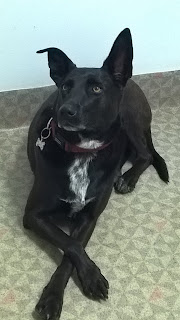 So I cracked an eyelid open this morning and waited, waited for the shitting headache and the topsy turvy walls of the last week. Sure I had been up a couple of times to pee - what's that all about Alfie? Just when you get to a point in your life when you need the sleep and are NOT doing the 'Mummy I threw up in my bed,' dance, you are awake with a fully laden bladder and the loo route on auto pilot, probably more than once but hopefully less than half a dozen times a night. Bugger. But I digress. Yeh I had been up a couple of times and was pleased to see that I made it to the loo without head butting any walls, but I was still apprehensive about being fully awake just in case the virtigo and the headaches were just sliding around on the floor waiting to attack.

But the sky was blue and the sun was shining and things, including walls and floors were all where they were meant to be, so all was very good with the world.

It's remarkable to me that this NORMAL shit that I take for granted was such a relief this morning.

No I didn't LEAP out of bed, but I did sit up and was cautiously chipper about the day. Fucking YIPPEE!

Poor old Dog has got a sore back leg again, so she needs a bit of a rest, but she's not much fond of that idea. Regardless of pain she just wants to run like a maniac after her ball, literally until she can run no more. But today she was forced to wander around the off leash dog area in the Botanical Gardens and the 3 of us enjoyed the outing. Yep I got some steps in and was thrilled to be able to enjoy the great outdoors under the pale winter blue sky. Ahh.

And I told Stevie that I'd make a roast chicken for dinner and that's still on my list, although I must admit that I am flagging a little now.

I know why people buy whole raw chickens, it's because they are so cheap, but in reality, it'd be far more energy - mine, efficient to just buy a ready cooked one. Are there still places like Big Rooter? Not here in the small country village of the Goldie I don't think, but maybe in the city?

Anyway I am getting ready to stuff it with a lemon and garlic and slather it with butter and shove it in the oven for 90 minutes - yeh she's a pretty big bird, and I'll make some cheater roast veg and call dinner done.

And then I am gonna slide into my chair and probably snooze away until bed time, cos whilst I feel better, I reckon the week from hell might just have taken it out of me a wee bit.

Seems ridiculous to me that now I consider today to be a good one. 5 Years ago I might have said, 'Oh fuck that was boring, let's do something fabulous tomorrow huh?' Times sure have changed.