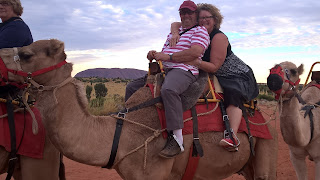 Sure I could have opened with a pic of the Rock, but this is a a view of it no-one ever thought they'd see.

I am loath to admit but philistine that I am, I have often been heard to say, 'Ayer's Rock - Nah I don't want to go there, I've seen it on the tellie.' But now that we are here, I am very pleased we popped by.

There is lots to do and places to go and things to see and wonderful stuff to eat.

Yeh the flies are still driving us mad - I know, not a long road, and it is pretty fucking hot, but we have been out and about seeing stuff that I am so pleased to have had a look see at.

I think my favourite might have to be Kata Tjuta - The Olgas for us old folk. I just loved the roundness of the place and it is vast! And of course Uluru is pretty impressive. Lots of people I know wax lyrical about the spiritual nature of the place and I waited for something to hit me, but nah, that was just another family of flies.

But it doesn't matter to me that I am gonna leave this place, the same, non god fearing atheist who arrived here, cos the images themselves have been wedged into my memory and they are curious and beautiful and strange. There are bits of the rock that have been so oddly eroded, that it looks like some alien has dropped by and infected it with a flesh eating disease. There are caves and hollows and scratches and there was one really long bit that was like a finger lifting itself right up off the Rock. You could see daylight between the long skinny strip and the bulk beneath. How it stayed there I do not know, but it was bloody wonderful to see.

So by all means pop out here and have a look and there is a walk all the way around - 10 and a half Kms so not for me, but it looked pretty manageable, and there are shorter jaunts for those of you who don't want to carry enough water for a camel drinks party.

And then there is the controversial climbing over the top. The Aborigines who own the Rock don't want people climbing it. There are signs up asking you not to do it, that the place is of spiritual importance, and then there are whitey signs saying that it is dangerous, but still we saw a steady stream of folk, arses stuck to the ground - literally slip sliding down one side of it, one young bloke sat and cried fearful of going forward but knowing there was no way back. One fuckwit father with 2 young girls, not more than 4 or 5 attacked the end drop with such gusto I feared for the babies. They carried no water and sure enough he held their hands, but I had to go cos I couldn't watch him so thoroughly put those little lives in danger.

And so I am conflicted. The owners of the land have asked that people stay off the Rock. I don't think they are best pleased about all the usual yomping at the base of it either, but that is their compromise. In the early 80s when the government handed ownership back to the Aborigines, it was on the proviso that it was immediately leased back as National Park, and so National Park rules apply.

So instead of a spiritual awakening, I just feel a sadness. I wonder where the extraordinary amount of cash goes and I wonder where all the local Aborigines live and how they live. I rather thought this trip might provide some answers, but instead I just have more questions.

But that is a side bar, cos I have been really impressed. The place we are staying at is lovely and we have eaten fab food and seen beautiful art works of all kinds and visited places that now, when they are on the tellie, we can shout out, 'We've been there!' Surely we aren't the only ones who do this? It's an excellent game to play while watching suspect movies like Mission Impossible 1-Infinity.

AND Stevie took me on a Camel Ride. He didn't want to and when we got there, I wasn't at all sure my 2 metal knees were gonna bend far enough to even let me mount the fella - Psycho ours was called. But the girls shoveled me on without the need of a backhoe so that's a testament to the strength of these gals and off we trotted.

It was something! A bit uncomfortable if I am truly honest, but pretty fab too. The sunset was brilliant and the photos in my mind are better than on the camera. Getting on and off Psycho was a bit fraught and yeh I did swear - a lot. I am not G entertainment afterall. I am so pleased to have trooped through the desert on a camel.

When I was shoveled off I walked away like an old arthritic John Wayne, but today has dawned blue skies and straight legged. Yippee!

I really like this place.
Posted by Unknown at 09:57