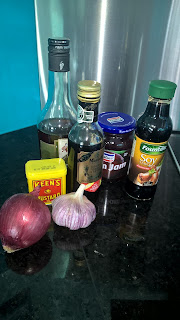 The kids were down last weekend, and I do very much love to feed 'em up. Yeh I have officially turned into my Nanna, that lovely woman who used to spoil me with all sorts of treaties. One of my earliest memories was being with her almost every Saturday morning and we'd 'walk up the terminus', that was where the old trams stopped at Camp Hill, and she'd do the weekly shopping at the butchers and grocers and candlestick makers. Well I made that bit up about the candles, and then on the way home we'd walk through the BP garage and she'd let us buy a little white bag of lollies. They cost a couple of pennies and I loved it that I had my very own little baggie of goodies. It was a treat indeed.

I think I might have mentioned before that whilst she was a sweetheart, and there were somethings that were her specialty in the kitchen, like her chrissie plum pudding which hung in calico in the laundry from October til the big day, there were many famous failures too. She was an expert at buggering things up, and I am not sorry not to have those recipes, but I would like to have written down the pudding recipe instead of just hanging around waiting for my turn to lick the bowl. Mine were a maggoty mess and I have not ever bother to replicate them.

Anyway, I made the kids pancakes and berry compote for breakfast and they both raved about how good it was. Zig whinged that too often his Mum's pancakes were a bit crap and it was only then that we all realised she had been making up the recipe and had missed the essential ingredient of an egg, so basically she had been making flat little rounds of clag glue...oooooh yukky. But now she knows. and maybe I should write some sort of recipe down all the same, except that I just throw stuff in til it looks right, so amounts would all be a bit of a guess.

And that's just like my Dad's plum sauce recipe which goes so well with porkie's spare ribs. This is a Stevie's favourite especially on a Saturday after golf. This is what I am whipping up today. Except that like any of my 'recipes', Dad's has remained a bit of a secret. Oh I know the ingredients list but the amounts are a mystery. It's a slow cook thing which allows all the flavours to meld and it's only as it cooks and I can smell it, that I know I have got it right. It is often a bit of a crap shoot - never truly awful but often a bit off.

So here's the recipe I think.

Saute one large chopped onion in plenty of butter.
Add some crushed garlic - a couple of cloves.
Stir in some mustard powder - maybe 2 big teaspoons?
Empty in a bottle of plum jam - not the cheapest, but not the most expensive either.
Throw in a couple of tablespoons of Red wine, red wine vinegar, soy sauce, and I usually put in a splash of balsamic too.
Then it needs to simmer, very low heat for a couple of hours - about as long as it takes to cook the whole foiled oven baked spuds.

The really good thing about the plum sauce is that it freezes well, so if it's a good one, I chuck the left overs into a zip lock baggie and freeze it for next time. Yippee.

Here's to comfy Saturday nights with Dad's plum sauce.
Posted by Unknown at 15:58