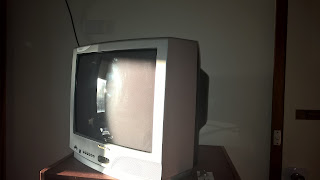 When I first arrived in London for what turned out to be a 7 year stay, not the usual Aussie 'nip in and have a quick look-see', I bought a somewhat suspect car from a guy literally on the side of the road, and used it to tour around a bit like a maniac, cos it did in fact go like a shower of shit, so long as I kept up the oil along with the petrol.

So one weekend I took off to the coast - Bournemouth about 200Ks away, and as my luck would have it, it turned out to be Gay Pride weekend and decent accommodation was hard to find, but I wanted to get out and get looking so I threw my bag into the very first available room, and without a backward glance I was out on the street dancing and drinking beers with gay men a plenty. It was a rainbow time.

However when I returned to put my head down and my danced out feet up, I was faced with looking in detail around the room. There were pubes matted around the shower cubicle and blood stains on the doona. At a rough guess I would say that the cleaner had had more than the day off, they may never have appeared at all.

So I did what I imagine we have all done at some point in our lives, and that is, with tweezery fingers I lifted the sheets and threw the pillow on the floor and lay fully clothed, flat out on the bed, arms crossed over my chest, corpse style, and did not move as I willed myself to sleep, and as soon as daylight hit the window ledge, I was up and outta there....oooooh YUKKY.

Well the Erldunda accommodation reminded me very much of Bournemouth.

Old didn't worry me, I'm not a youngster myself. Worn out didn't worry me cos I feel pretty worn out most of the time, but grubby, pest catching equipment in the loo, signs warning to close the doors so the snakes don't visit, whole walls that move when you plug in the kettle, well that was all pretty shit. Still we moved in and went for a look around. It doesn't take long.

When we got back to the room - no we were not changing for dinner - this was not the Queen Mary after all, we were gonna make a cuppa, and then some shitful noise started up.

Seems the people next door who thought it was acceptable to park up their truck and trailer right across where we might have liked to park, well they had turned on the ancient air conditioner, the machine for  which was hung right out side our window. The fucking noise instantly reminded us of TMR night works, so Steve went to see about a change of venue.

The girlie suggested that it would be OK cos they probably would turn the air con off at some point through the night.

I didn't think so and between us we and the manager we came upon a compromise which suited us all, or nearly us all.

I watched the ancient tellie, which could well have been the one some turd stole from me under the guise of taking it back to his workshop to fix, back in the early 90s, while Stevie threw himself through the shower. Bore water didn't appeal to me as I am already itchy enough with the meds and so I figured I would just add to the ambient stink and shower at Coober Pedy.

Happy Hour at the pub was indeed happy, so we downed a few beers and decided to brave the food. 2 specialties of the house burgers appeared and once we removed an entire bag of unwashed spinach and other lettuce, we looked into the face of slimy perhaps nuked from frozen, perhaps meat patties. I ate the bun and the chips, Stevie had another beer.

I don't know what the other options are if you are driving from Yulara to Adelaide, cos you almost have to stop here, but I reckon it is definitely necessary to lower your expectations. Just cos you are paying a reasonable sum, don't expect a reasonable room or anything close to fine dining.

We are at Coober Pedy, and it is already an olympic pole vault leap ahead or Elrdunda.
Posted by Unknown at 09:52