Floods to Desert in a Single Bound 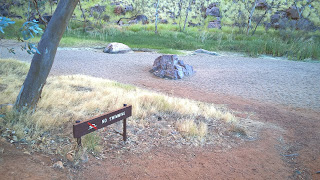 How do you know when you are in the Desert?

Well yeh you'd think it'd be pretty clear huh? Except that in January, a few short months ago, there was some rain in these here parts, and so all around Alice Springs sprung into life. Flowers bloomed and rivers ran and grass greened up and the trees bowed down to the rain gods for a long long long overdue drink. It was good rain. It was memorable rain, and the landscape is still singing its praises. Yeh there is soft swaying grasses where I thought there'd be, well, I thought there'd be dirt and swirling spinifex, and there is a definite green tinge where I expected rust colours - even with his old pal colour blindness Stevie can see the difference.

But we know we are in the desert cos the maps tell us so.

The Simpson Desert crossed by the Macdonnell Ranges with Alice Springs settled grandly where the hills took a little break - yeh that's where we have been exploring - not in the style of the old fellas who set out with too little food and a horse and their mates without first stopping into ANACONDA for a tent or a billy or whatever else one might need to go 'bush'. Nah we are staying in an apartment and we look at the maps and head out in our air conditioned chariot with an esky filled with drinks and food and we look around and go, 'Wow, look at that!' and then I peel Stevie a grape and we sometimes get out and go for a bit of a yomp. Yeh it's all very civilised.

Except FOR THE FLIES.

I always thought that desert people on the tellie were just lazy. Too lazy to even brush away the flies. But now I know they aren't lazy, they are immune to the fuckers and I would like a bit of that! When we get out and yomp for a look see, we become magnets for the fuckers. And I don't mean just one or 2. Whole herds of the swarming fucks descend. The weight of 'em could quite simply push you into a shallow grave, in fact I wonder if all those early explores didn't in fact die from starvation at all, but from being pile driven into the ground by a weight of flies.

The upside is that I have been getting an aerobic workout for tuckshop flabby arms as I windmill my way around. Thankfully the place is empty of people and Stevie is not mean, cos if any video of this action surfaced, it would be an internet sensation and I would be a global laughing stock. Crazy mad woman tests to see if she can fly. Blessedly though it would be a silent flick cos if you open your mouth to speak, you can end up with  FLY Fricassee for lunch - ooh crunchie yuk!

There's an art to getting back into the car without all your new friends too. It's helpful to rub most of 'em off your back by dusting the red dirt off the car doors with your shirt and then give yourself a final flutter all over with your hat and then with olympic speed and the finesse or a prima ballerina fling open the door and dive in and slam it shut. Inevitably, between us, one or 2 of the buggers join us and then it is sport to see if you can fool 'em into flying out the open windows, first one window down a bit, then both, then a dance of the 7 veils with the window controls, or - vegetarians should look away now - squash those fuckers into the dash board. Except they are smart little fuckers and it can take sometimes 20 or 30 Kms before you rid the car of 'em and of course by then you are at the next point of interest, so it all starts over.

But you'll be surprised to know that it's not the red dust or the flies or the empty creek beds or the long long roads of nothing that herald the desert. It's the snot crust up your nose and the constant reach for lip balm and the skin flaking off your legs and hands and arms and maybe even your face - I am not looking that closely.

Yeh it's DRY out here in the desert.