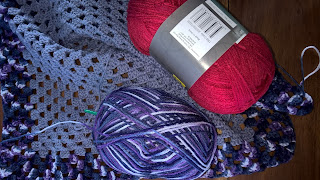 More years ago than I care to remember, but it was definitely after 1989 cos that's when I became single and so the wardrobe of the married woman became obsolete, a very gay friend of mine was going to his debutante ball. He asked me to be his date, or give him away, or present him, or something. Some of the details are a bit of a blur.

He wore my wedding dress. The whole enchilada. And I wore some sort of tuxedo. Cross dressing was the order of the day. He was more into cross dressing than drag queen and so his makeup was demure and I might have drawn on a Mo.

We made a very dashing pair.

There was the presentation line, ahhhhh.

One of the blokes looked amazing from the front and riotous from that back cos he was sans girdle and slip and actually sans back of the dress.

It was a bloody marvelous evening.

I imagine John took my wedding dress home and maybe he used it as bedding for his cat?  I don't know and I don't care. I have never missed it.

But as I started to crochet something this week I have been wondering about a beautiful shawl I made when I was but a girl. It was a lovely thing that I wore with pride over many winters. It went with everything, and I can still feel the glamour I felt when I threw it with gay abandon over my shoulders.

I must have thrown it out at some point, or maybe I just left it behind when I did a runner from the marital home. But I miss it.

So now that I am sure I have remembered HOW to crochet, I am wondering WHAT to crochet, and the idea of replacing that shawl is a pleasant one. I guess I will see how it progresses, cos I definitely lack persistence these days and it might turn from a huge project into a sampler like we uselessly made in primary school. I fucking hated the waste of time and effort of those things and the memory of my third grade teacher telling me mine were shit, still lingers, Cow!

My girl suggested that I might like some of her crocheted squares she has squirreled away, and too quickly I said no, but now I am re-thinking it. Maybe it would be a cool thing to make a something out of hers and mine. I am sure that whatever colours she has used will blend with mine cos we both jump onto the same side of the colour wheel. Yep this seems like a good idea. And I have / maybe had, cos I am not sure if I still have it, a cardigan which is / was, very ordinary except for some lovely ribbon threaded randomly through it. This is an idea that is entertaining my mind so I might start collecting remnant bits and pieces if indeed I could stumble over an old fashioned haberdasher.

The unexpected advantage of this project came to light while watching the tellie last night. There was some story about women and exercise and the usual shit was sprooked except that the fella ended with the good news that even doing exercises with your THUMBS was good for increasing white blood cells. So fingers flinging about some thread for a few hours at a time, must be like running a fucking marathon. Brilliant!

Are there clothes from before that you still remember fondly?