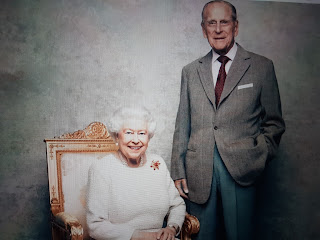 So Queen Bessie and ol' Phillip have been hitched for 70 years. Longer than I have been alive. And that is amazing to me!

I reckon the secret might be that they live in a 100 room palace and that limits the amount of time they have to be looking at each other's face and presumably they have their own bathroom so there is no time spent smelling the other's shit - yeh I reckon even royalty shit is a bit on the nose. But they do seem to happily rock along together. They seem to share private jokes and there is a certain whiff of leaning into each other that implies to me at least that they are happy and that's important.

I reckon that there are belly laughs a plenty after Bess has gently roused on 'Ol Phil for yet another of his famous UN PC gaffs. Yeh I reckon Bess is a belly laugher. She looks like she might, not often but certainly sometimes laugh til she wees herself ever so slightly.

And I reckon that they'd have their own private signals to let each other know when they are bored out of their gourd, or a sign to say, 'For fuck sake don't put that ridiculous dead skunk hat on' and another to ask for a walloping sherry top up. Yeh after 70 years, I rather doubt they need to actually speak out loud too much to make themselves understood.

I met a fella this week who over coffee regaled Stevie and me with the woes of his marriage. And they weren't even woes really, he was just matter of fact telling us stuff. Maybe he was just filling in the silences? I don't know what prompted his sharing.

'The Wife' sleeps somewhere else. She's a Born Again Christian. They never eat dinner together. He only ever watches sport on the tellie and she watches 'all the reality TV shit', - not on the same tellie obviously. Occasionally they go for lunch together, if there is someone else eating too.

Well this doesn't sound blissful to me. If I spent my days trying to avoid being in the same room as Stevie, then I reckon it would be time to piss off or at least pitch a tent and learn how to cook over an open fire and  shit in a bucket in the front yard. I don't reckon my belly could stand the stress of turning a corner and running into the person you are doing your level best to avoid.

And I suppose it's possible that he and she have played this avoid each other game long enough to be very good at it, but that's not a skill I want to cultivate.

Can you imagine the early days of this arrangement, when irritations are major and raw and hurting and I imagine shouting is reverberating around the rooms. One person heads for a shower and the other, knowing the cleansing habits of their lifetime partner, knows just when to 'accidentally' use the hot water in the kitchen so that cold water shrinks bollocks or maybe for variation, the cold water is stolen so that third degree burns means a trip to the hospital. I mean it all seems like that movie, 'War of the Roses' and I reckon it could get brutal. The mind games alone would be exhausting.

But perhaps these 2 people have played it all to the end game and have popped out the other side with a tacit understanding of how best to rub along without killing each other and maybe even providing for the possibility of occasional joy, even it is with other people.

That's not for me, but horses and course and all that I guess.

But compared to this, Bessie and 'Ol Phil have got it all sorted huh?

I have long thought 'Ol Phil was a bit nuts, but maybe he has just become so worn in to the royal life, like an old pair of cords, with the saggy smooth fabriced bum and stretched out knees and the holes in the pockets, that he can now get away with anything at all.

And the photos of 'em both this week are rather lovely. Good on 'em.

Oh and if you thought this was gonna be one of those advice posts, well think again. I sure as shit am not an expert.
Posted by Unknown at 11:19