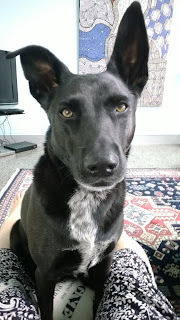 Dibley Dog is fine, but my friend's dog is no longer with us because it seems someone doesn't like the mating noises of crows.


A friend of mine has or rather had a gorgeous girlie dog. She was the joy of the family, spoiled and smiled at and with. She, the dog is /was such an integral part of the family, 3 generations of humans who all loved and cuddled and walked and fed and looked out for and after her. Yep she is/was a ridiculously well loved pet.

Until last week that is.

Last week, her dad took her out into the park and she had a bit of a chomp on something as dogs do, and very soon after they got home Dog became unwell and then was sick and taken to the vet but there was so much damage to her internal organs, poisoned, that there was no hope and so Dog died and her human family are heartbroken.

Her mum is a crying mess and her dad is scouting the neighbourhood looking for clues. He has put up fliers around the park warning other folk to be careful with their dogs. Now he's gathering details, and what is dribbling in from people on all sides of the park is disturbing and angry making and Mum who is a calm easy-going woman is now ready to smack someone with a shovel.

So here's a run down on the info gathered to date.

The park has many trees - not unusual for a park here.
In the trees live a murder of crows which may or may not be going hard at it cos it's the mating season.
One of the houses that front the park is owned by a person who rents out a room on AIR B&B.
Most of the reviews for this room are favourable except for 2 which whinged about the crows noise early in the morning. BUGGER!
Neighbours have seen the house owner feeding the crows, even though other neighbours have been party to whinge sessions with her about the crows.
Crows have been dropping dead all over the park.
There are photos of the house owner scooping up dead crows and shoving 'em in HER OWN RUBBISH BIN, on rubbish day, even though there are plenty of bins in the park.
A neighbour has scooped up a dead crow and has taken it for testing which is firstly expensive and secondly pretty slow.
The police have been informed and given all this info.

All this is circumstantial of course.

A second dog has died.

I wonder if there would be some action from the police if a kid had picked up the poison bates or the dead birds.

I know the police have plenty to do, especially in Schoolie madness, so what's the solution here?

A bit of vigilante  justice doesn't seem out of place to me.