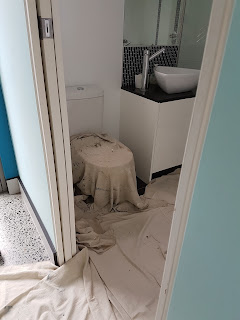 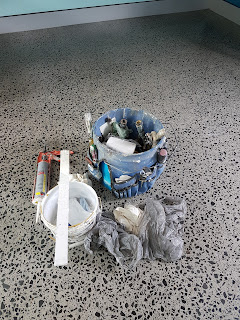 The Painters are still in, but now they are inside, so Stevie's stress is really ramped up. He does not like people in his house, Sometimes I think he only just manages to put up with me in his house. But these fellas wore out their welcome sometime last week and now he's projecting his hatred of change onto Dog. 'She really hates change doesn't she?' But we are all sucking it and playing as nice as frayed tempers allow.

It was all agreed on a gentlemen's handshake. The boss sent a quote, we agreed it and I don't think any cash has passed between parties yet, but coffees have been drunk and silly stories exchange and there is no worry about being diddled and Stevie is pretty sure he'll get the job he wants cos he's on 'em like shit on an army blanket.

So we are all just cracking on, and hopefully by the end of the week the walls will be painted, no-one will have a flat nose and we'll have the house back to ourselves, blessed be. Ahh.

But yesterday our Sunday was disturbed, our loose schedule of doing fuck all turned upside down. Because a couple of real estate folk wandered on in - ok I knew they were coming because they had harangued me most of Saturday. The house is NOT on the market but if you give an agent a sniff, even only one nostril's worth, then there is just no getting rid of 'em.

So they trooped in with a bunch of people and then as they were all leaving a young fella said loudly that he was gonna make an offer? Really? He went off to their office and then I did what I do almost every Sunday afternoon and that is sank into the bath. I didn't expect anyone to be coming back with paper work to buy The Bug House after a 15 minute inspection on a Sunday afternoon. I know people have all sorts of cash stuffed into their pillow cases and frozen in ice cream tubs in the second freezer, along with some whole fishes and an assortment of body parts from thumbs to scalps, but I just didn't think any of this sounded likely.

The money on offer was too little by a good long way and the story about the contract and the finance and the time frame wandered around like a drunk fella at the end of a long night at the B and S Ball.

I was in the bath and felt bad that I had left Stevie to it, nah not really the bubbles were lovely and the book exciting,  and he is more patient with the bullshit, until he isn't then he really isn't patient at all. Finally he flung 'em outta the place and set to cooking his roast dinner - all part of the Sunday ritual.

Predictably there was a call back offering more money but still not enough and the conditions had wavered about like the arms of a faulty windmill in a cyclone. He was watching Saturday's rugby game and wanted rid of 'em so was Pommie rude not Aussie girl rude, but they did not call back.

What did give me the shits, was that they told us to stop the painting, that it was no longer necessary, except that no contracts were agreed and in any case, WE HAD AN AGREEMENT WITH THE PAINTERS.. How easy was it for the agents just to fuck over the painters?

I mean what did they really expect? That we'd cut the painters loose and stiff 'em for their cash all on the off chance that we believed that they were being truthful?

I don't know how anyone who would suggest that could ever be trusted.