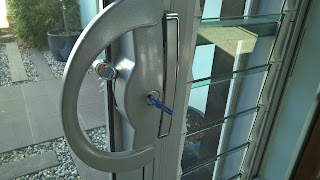 Ever since I was a wee lass, I have always thought that if someone broke into the house while I was sleeping, I would just pretend to already be dead so they would leave me alone. Yep, this has been my defense method for as many years as I can remember. Sure that makes me a coward! Oh Well.

You know those movies where someone hides behind a dead body, or uses a dead body as a shield, or crawls under a pile of dead bodies to save themselves, well yep, that would be me. I know lots of people who look at that shit a shake their heads and make all sorts of derogatory remarks about how disgusting or lame or cowardly or pathetic, but I always think, 'That's using your brain.' cos a good dollop of self preservation is always useful.

This might be why I am such a wooooosey when it comes to watching scary shit on the tellie or at the pictures.

I have never been good at watching horror stuff and now all gore and guts has become just part and parcel of every night tellie viewing. Am I the only person who has noticed this? 'Criminal Minds' is about my limit and even then I do spend some considerable time hiding behind my hands asking Stevie if the scary bit is finished.

I remember going along to the pictures to watch a double bill, 'Misery' and 'Silence of the Lambs' with a gaggle of gals. I ended up getting such a fright that I literally fell off the chair and spent a good long time calming down while I stared at the back of the chair in front of me. Yeh I know I wouldn't fit down in the feet well anymore and even if I did, my knees wouldn't bend well enough to get down there or get back up, and maybe that's why I just don't go to horror hit at the pictures any more.

My Darling Boy was asking me about scary movies last week and I happily told him that I just don't like 'em. He and his mother find 'em FUNNY! But I just can't get passed the idea that it could all be happening to me, even the Sci-Fi weirdness, and that terror I feel is very fucking unpleasant. He went on and on about a whole bunch of movies that were either coming out or had already been released or he had watched on DVD or something, but unusually I finally had to tell him I had stopped listening, firstly cos I didn't care and secondly if I had been paying attention, I would have been shitting myself and no kid needs to watch his Ma do that!

But the point of all this is that on Saturday night when all was quiet in the house, Dog started to growl. I was bedded down for the night and didn't fancy getting up to take her out for a wee and generally she has been doing a little crying thing when nature is calling and this was a growl, a cranky sort of noise. And then there was a bark. Not a friendly, 'I am here and would enjoy it if you played a bit of ball or fed me some treaties' type of bark, but a low guttural sort of, 'Don't fuck with me' sort of bark. I opened my eyes but didn't move. I watched closely for any strange shadows flitting across the walls. She growled and barked and I lay there completely still, wide awake and waiting for someone to wander across the back deck. Yeh I pretended to be asleep, maybe dead. Maybe if someone broke in they would not look into the lounge room floor cos how often would they find some crazy old gal sleeping on the floor when a bed was available. Maybe if someone was breaking in they'd just run through the house and hopefully steal the cars.

I saw no movement and finally Dog stopped the growling and the barking. It took a while my blood pressure to return to normal and a while longer for me to think about sleeping. I wasn't game to pick up my kindle, just in case there was still someone there and they'd see the light and then they would know I was not dead.

I am not at all a scardy cat in this house, I have been here often on my own and am almost never fearful of intruders, so what was curious was that firstly I jumped to the break and enter scenario, and more importantly that my old tried and tested method of feigning deadness was automatic.

Are you a brave soul who would confront an intruder or does under the bed, breathing as lightly as your panic would allow, seem like your best option?
Posted by Unknown at 13:19